′Eat out to help out′ discounts in UK boost coronavirus-hit restaurants | Business| Economy and finance news from a German perspective | DW | 14.08.2020

A taxpayer-funded scheme called "Eat out to help out" is breathing new life into Britain’s restaurant sector. But worries are mounting about what will happen once the lavish state subsidy expires at the end of August. 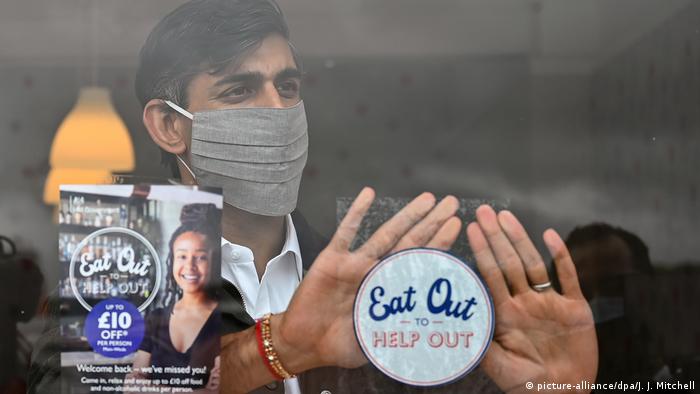 Walk past most restaurants in Britain and you'll most likely see diners out enjoying discounted food. It's all thanks to a government-backed "Eat out to help out" scheme designed to boost trade by subsidizing meals at restaurants, cafes and eateries offering sit-in dining.

UK Chancellor of the Exchequer Rishi Sunak's half-price-meal discounts reeled in more than 10.5 million people between August 2 and August 4.

The coronavirus lockdown in London forced a separation from her partner. A government-discounted meal in the socially distanced South London seafood restaurant is reuniting them again.

"Despite it being a random Monday, we treated it like a special occasion because we can all do with a treat right now," she says.

Forced indoors with only exercise and essential shopping permitted for just under three months, affordable dining and the chance to escape home cooking is driving customers back out to spend. It's a source of relief for Polly Allen, who indulges in multiple desserts at an Italian restaurant only "on the basis of the scheme." 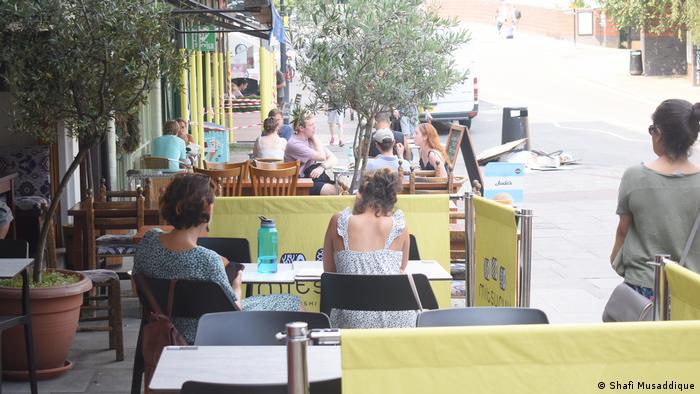 In the small town of Bury St Edmunds, in the East Anglia region, casual British food diner Gastrono-Me saw revenue climb 189% compared with the same month last year. Owner Mike Simmonds says the Eat Out to Help Out scheme is "fabulous" for both his casual diner Gastrono-Me and individuals out of a job.

"For a lot of people who've been on furlough [the UK government jobs retention scheme] and 20% down on wages because of coronavirus, it gives them an opportunity to treat themselves."

Up on the sandy beaches of Whitley Bay, northeast England, fish and chip shop Trenchers Bay has been fully booked from Monday through Wednesday. And it’s not just because it holds the crown for being the best in the country.

Or the sea views on offer from Spanish City, a domed space for seaside goers looking to eat out. "We absolutely love this discount deal," says Spanish City General Manager Chris March, adding: "It's given people the confidence to say they are ready to go out and try new things."

Restaurant owners and workers keep repeating the word "confidence." The shutdown of public life and business under lockdown measures, and the continued fear of commuting, despite the relaxation of lockdown restrictions in Britain, damaged established brands such as Jamie Oliver in recent months.

But he warns the scheme has its limits. Many high-end restaurants only open toward the latter half of the week, meaning restaurants like Smith's miss out on the opportunity to reel in new customers wanting a taste of "traditional Chelsea and English culture." 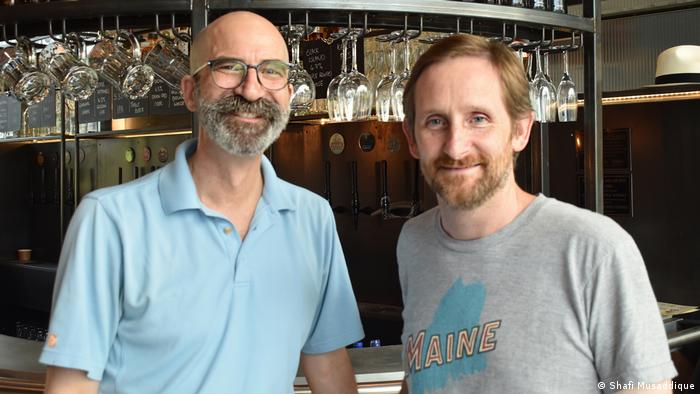 Despite temperatures high into the 30s (Celsius) and the ongoing summer holidays for school children, the Eat Out To Help Out scheme hasn't been so sunny for everybody.

Paul Duran runs a café usually bustling with office workers, tourists and locals. Despite offering half-price food on his already under-10-pound meals, Duran has hardly seen customers. Hidden away on a quiet street near London’s King Cross St Pancras international station, which houses the capital's Eurostar terminal, he fears for the future of his business.

"You'd think people want to take advantage, but not here. The office workers aren't here for our lunch trade and we don’t know when they'll come back," says Duran.

Rose Tuckey says that despite being "much busier," the scheme has dented weekend trade. "It's so short-term," she says of Rishi Sunak's scheme ending on August 31. "It's a marathon to survive. It's a nice thing but it won't make a difference."

One upside of the scheme is younger diners reconsidering her restaurant. But revenue is down 70% and tight margins bring added pressures for her modern British restaurant in West Hampstead, North London. "It's hard to see us surviving," she says.

Tuckey is predicting a "massive wave of closures come September" once the government's furlough scheme paying up to 80% of wages ends and restrictions on the amount of rent landlords can charge for lifts.

Michael Gratz, co-founder of American-inspired restaurant Prairie Fire in West London, fears for the scheme's long-term impact. "Discounts could really hurt the industry. Perhaps not kill, but really do severe damage," he says.

"People could get used to the idea of discounts and when it ends…high-quality, more independent places like us could potentially suffer."