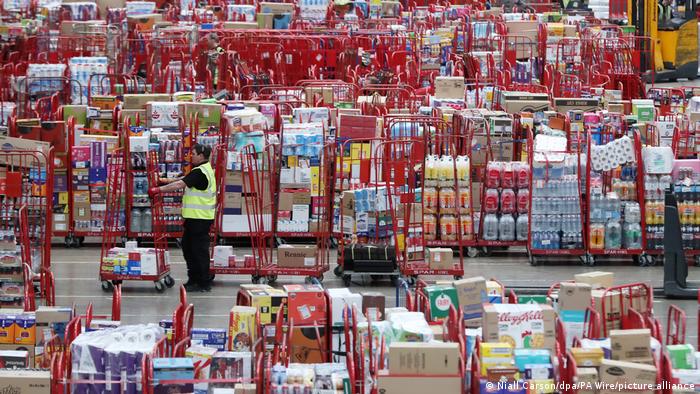 The UK's Brexit minister David Frost said Friday that the EU's proposals to ease the movement of goods between the British mainland and Northern Ireland don't go far enough.

In an interview with Politico, Frost reiterated that London wanted a major concession from Brussels on the role of the European Court of Justice oversight over decisions affecting trade in United Kingdom territory.

"All I can say is the governance issue needs to be addressed seriously and if the EU is willing to have a conversation about that on which they move off existing positions obviously we will be happy to have that conversation," he said.

"They [Brussels] will need to if we are to find a solution, there needs to be a significant change if we are to get an agreed solution," Frost added, ahead of his talks Friday with European Commission Vice-President Maros Sefcovic in Brussels.

The EU on Wednesday offered Britain a package of measures to ease the transit of goods to Northern Ireland, but stopped short of agreeing to an alternative arbitrator to settle post-Brexit trade disputes.

The proposals include reduced customs checks and paperwork on British products intended for Northern Ireland.

Prime Minister Boris Johnson signed up to the so-called Northern Ireland Protocol as part of his Brexit agreement in 2020, but has since argued it was agreed in haste and was no longer working for the people of Northern Ireland.

Brexit negotiations were delayed, partly due to the desire to avoid a hard border between the UK territory of Northern Ireland and EU member, the Republic of Ireland.

To get around this, Northern Ireland — riven for decades until 1998 by violence over British rule — was given unique status as a member of both the UK and the EU single market.

This required new checkpoints at ports to prevent goods from England, Scotland and Wales from getting into the European Union via Ireland.

Britain has for months called on the EU to allow some changes to the protocol, due to delays in shipping food and other goods to the province.

Sections of the pro-UK unionist community in Northern Ireland have also rioted over the protocol, which they say drives a wedge between the province and the rest of the UK.

On Thursday, a British government spokesperson welcomed the "considerable effort" made by the EU to address issues protocol but said "a substantial gap" remained between the two sides.

"Both we and the EU now have proposals on the table. We need to discuss them intensively in the days to come to see if the gaps can be bridged and a solution found which delivers the significant change needed," the spokesperson said.

"It is not a question of the European Court of Justice having any sovereignty over Britain or any part of Britain," Byrne told Britain's Times Radio.

"It is simply the fact that the European Court of Justice arbitrates on the single market of the European Union, in which Northern Ireland has been allowed to remain."