German parliamentarian Hans-Peter Uhl visited Washington to talk with the US government about the NSA scandal. He tells DW that US officials are still missing the point and calls for an economic response in Germany. 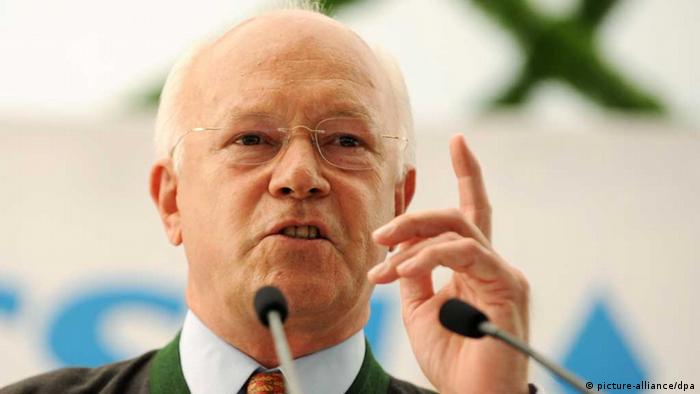 DW: You've had discussions with Congress and the Obama administration in Washington. The primary topic was the NSA and the surveillance scandal. What was your message to the American officials with whom you spoke?

Hans-Peter Uhl: The message is relatively simple. On the one hand, we have to fight terrorism alongside American agencies. We've been successfully doing so for years and that must continue. On the other hand, and this is something people in the US still have to learn, data protection is an issue - not just for citizens, but also for businesses and for the state as a whole. We cannot tolerate America ruling Germany as a digital occupying power.

Do you have the impression that Chancellor Angela Merkel's statements, in which she clearly expressed her frustration weeks ago, have reached the members of Congress and the government here?

It would surprise me if they've reached them. There's a different type of concern here. Foreigners' data is not seen as being of any particular importance. The question is: How damaging are the actions of American intelligence services to the US economy? The European and, in particular, German market is of great significance to the US. Recently, major IT providers in the US, from Google to Microsoft and Yahoo, banded together and issued an urgent appeal, warning the US administration, 'Cut it out! You're damaging our interests and American economic interests.' That message is getting through.

Is that also your message to Germans: Avoid Yahoo and Google and use domestic providers?

You seem to be also referencing a contract given to Cisco to develop a secure, internal communications system for the German military. One might say you could compare that with just handing over a copy of the relevant security data to the NSA. Now Cisco has it in its hands…

…but not for long. The contract expires next year. And then we'll consider what steps to take next. Things can't continue like they have been.

How do you want to see things move forward? What are you demanding in order to protect German data and the private sphere of German citizens against American companies?

There are a number of possibilities there. For one thing, American companies could be required not to forward the data. And that can be checked by German experts. Second, there will be a combination of German and US providers. German certification agencies should also be tasked with ensuring that the data remains in Germany.

What have you heard thus far from the Americans with whom you've spoken?

They're beginning to understand. They emphasize again and again the necessity of collecting data in order to fight terrorism. No one disputes that. But they don't see the monstrosity of conducting surveillance on an entire government's actions and listening in on the chancellor's cell phone. That has nothing to do with fighting terrorism.

We also fear the US is conducting economic espionage. They will have more problems on their hands if they cannot somehow demonstrate that they are at least trying to prevent that from happening.

Let's go back to your statement that the chancellor's deep concern has not hit home with people here. Doesn't that also mean the German government has failed to look after its people' s interests and their privacy?

I would not describe it as a failure. Nevertheless, the information that Snowden provided served as a wake-up call to the German government.

Why is the German government in need of this sort of wake-up call? It has its own intelligence and knows what goes on in intelligence circles. Is that a major oversight on behalf of the federal government?

I think all of us were a bit too naive in the past when it comes to this topic. The thought was always: 'They're our allies. They wouldn't do something like that.'

Let's return to Snowden. Do you want to question him just as the European Parliament would like to?

No, we don't need to. He will now likely be questioned via video conference with the European Parliament. Snowden was never an NSA employee, but just an external administrator. We can't expect all that much from him anyway. Incidentally, he also misinterpreted the data that he took with him. So Mr. Snowden doesn't know all that much that he can share with us. We don't want to bring him to Germany.

You appear to be privy to much more as a member of the parliamentary Committee on Internal Affairs as well as the parliament's Control Committee. Do you consider yourself as having an overview of the extent of the NSA's surveillance activities and acquisitiveness in Germany?

No one can know that yet. We will know it with greater certainty in a few months. What's certain is that many pieces of information are going to come to light that will be uncomfortable for the US.

Do you expect that future agreements with the NSA and the American government will really be reliable? Or should the conclusion not be, instead, that Germany needs to very quickly and effectively build up its own security systems?

Once trust has been lost, it's hard to get it back. There's a German proverb: 'Lie once, and no one believes you. Even if you speak the truth.' The US is now in that position. I think that Germany should win back its sovereignty in the area of IT. Germany can do that. It's very much in the position to do so technologically. And we will do that.

Hans-Peter Uhl is the spokesman on interior affairs for the CDU/CSU group in Germany's parliament.

Two US politicians visited Berlin recently in an attempt to repair the damage caused by Snowden's revelations on the extent of NSA surveillance. But there was little in the way of cooperation with the German parliament. (26.11.2013)

German web users are notoriously concerned about privacy and data protection. The NSA scandal has given rise to even more distrust of popular US online providers. But what do Germans do to protect their data online? (19.11.2013)