Bobi Wine accused authorities of breaking into his car and cracking down on his supporters. The popular singer and politician has been in the crosshairs of authorities for his activism against President Yoweri Museveni. 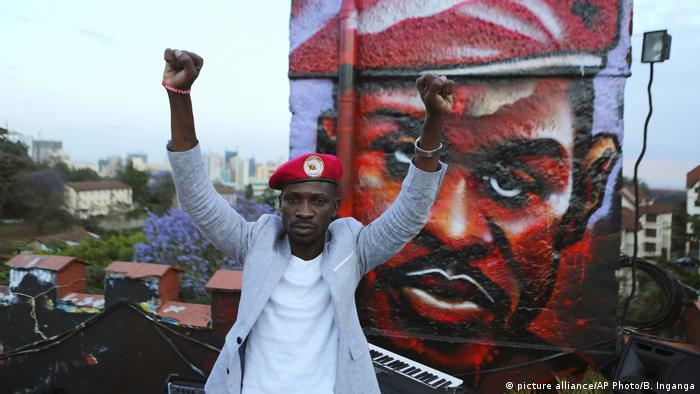 Ugandan police are said to have used teargas and a water cannon to disperse Wine's supporters at a beach resort near the capital Kampala, where he was planning to hold a concert, media and police said on Monday.

"He has been arrested in Busabala, where he was to address the media on the cancellation of his concert by the police," Wine's wife Barbie Itungo Kyagulanyi told AFP.

Ugandan police spokesman Fred Enanga would not confirm if the pop star had been formally arrested, but confirmed that officers "engaged him earlier and drove him away from Busabala."

Regarding the actions taken against his supporters, police spokesman Patric Onyango told Reuters that authorities were "empowered by the law to use reasonable force and that's what we did to disperse his supporters and make him comply with our orders."

Wine posted on Twitter about the police action against him and later, footage that purported to be from the arrest was posted on his account.

"They have been trying to break into our car. Now they are clamping it to drag us away. Stand firm. We shall overcome," the singer wrote.

Wine is among the most outspoken and prominent critics of Uganda's longtime President Yoweri Museveni. Authorities have repeatedly sought to thwart his public performances.

But the singer has still managed to energize young Ugandans through his songs about social justice. Wine recently announced that he would challenge Museveni for the country's presidency.

EU pushes for greater respect for human rights in Uganda

Depending on one's viewpoint, the EU is either interfering or doing the right thing by drawing attention to the state of human rights in Africa. DW turns the spotlight on Uganda. (04.12.2018)

Pop star-turned-opposition politician Bobi Wine, aka Kyagulanyi Ssentamu, has flown out of Uganda, his lawyers say. Police had detained him during a previous attempt to travel abroad. (01.09.2018)

Africans are living longer, healthier lives. This week we look at advancements in tech that are improving health services for women in Cameroon. As more South African homes are plunged into darkness, we ask why is the power grid crumbling? Students in Nigeria demand the reopening of their universities. And, we meet the blind Ugandan doctor still driven by a passion for his profession.