European football officials have urged FIFA President Sepp Blatter to step down, hours ahead of the World Cup in Brazil. Corruption allegations, most recently over Qatar's nomination as 2022 hosts, are hounding FIFA. 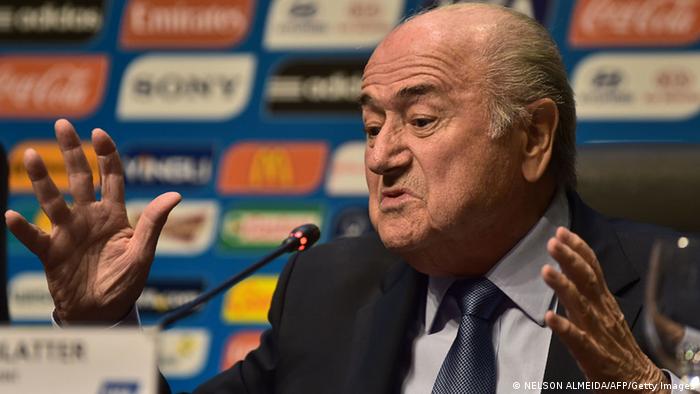 Sepp Blatter's encounter with the top football brass of Europe could have gone more smoothly, not least with regards to the Netherlands' Michael van Praag.

"Mr. Blatter, this is nothing personal but if you look at FIFA's reputation over the last seven or eight years, it is being linked to all kinds of corruption and all kinds of old boys' networks things," Van Praag told reporters, relaying his comments to Blatter in Sao Paulo on Tuesday.

"I told him: I like you very much … this is nothing personal. But you are now saying that Qatar was the wrong choice [as venue for the 2022 World Cup], but you are not blaming yourself you are blaming your executive committee," Van Praag said.

Blatter, who had said when he won a fourth term as president of world football's governing body that he would not seek a fifth, told European football bosses that he had changed his mind. Blatter intends to run for another term in 2015.

English FA vice-chairman David Gill said it was "disappointing" that Blatter had changed his stance about staying on.

"I think we need a full, frank and open debate about what FIFA needs going forward," Gill said.

It's not yet clear whether UEFA president Michel Platini will oppose Blatter next year; Platini has said he will not decide before September.

The president of Germany's DFB football association, Wolfgang Niersbach, told the DPA news agency that the atmosphere on Tuesday was "very, very cool."

Van Praag said that Blatter "received no standing ovation" at the 53-member UEFA gathering - a reference to his warmer receptions from African and Asian soccer officials earlier in the week.

Blatter on Monday had lambasted the "storm against FIFA" over the 2022 World Cup nomination for Qatar, saying "discrimination and racism" were at the heart of such criticisms. England's FA chairman Greg Dyke hit back, countering that "the allegations being made are nothing to do with racism, they are allegations about corruption."

The most recent, but by no means the only, corruption allegations surrounding Qatar's successful World Cup bid emerged in a newspaper report in Britain's Sunday Times. The report claimed the African officials were among those accepting money from Qatar in exchange for support.

Several major sponsors, including German sportswear giants Adidas, have urged FIFA to rethink the 2022 World Cup if wrongdoing is proven.

Corruption allegations are not the only issue hounding Qatar's nomination. Blatter himself has said the equatorial climate will likely force the competition to be rescheduled - to the northern hemisphere's winter and the middle of the European club football season. Human rights issues in the Gulf kingdom have also come under the spotlight, not least the treatment of foreign guest workers brought into Qatar for World Cup-related projects. FIFA launched an investigation into the issue after a damning report from Amnesty International late last year.