UEFA President Michel Platini has told Germany's Bild paper that the Qatar World Cup of 2022 should not take place in the summer. He also said it should not just take place in Qatar, incorporating the region instead. 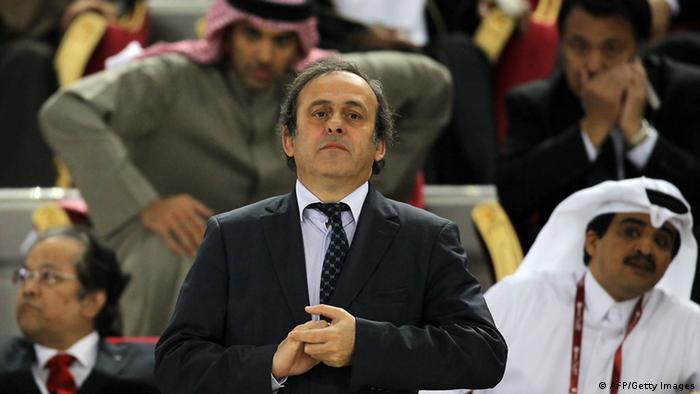 The French football legend Michel Platini told the mass-circulation German newspaper Bild that if he were the president of FIFA, the world's soccer body, he would let the 2022 World Cup take place in Qatar "with great pleasure."

"After all, I voted for Qatar," Platini told Bild. The newspaper also asked Europe's top football official whether he was considering running for FIFA's presidency in 2015: "I still have to think about that. It depends on whether I have the desire to do it. I still have a few months left to make a decision." Despite a string of corruption allegations against him, FIFA's current president, Sepp Blatter, won re-election to a third term unopposed in June 2011, after his only opponent was suspended prior to the ballot over his own allegations of corruption.

FIFA delegates awarded the 2018 World Cup to Russia and the 2022 World Cup to Qatar - with both decisions courting controversy from an organization already under severe scrutiny - in the first double World Cup decision ever made. Platini had said before the December 2010 vote that he would support Russia and Qatar.

Six months later, when Blatter was re-elected as president, FIFA also agreed to change the way in which it chooses World Cup hosts - allowing a larger number of representatives to decide. 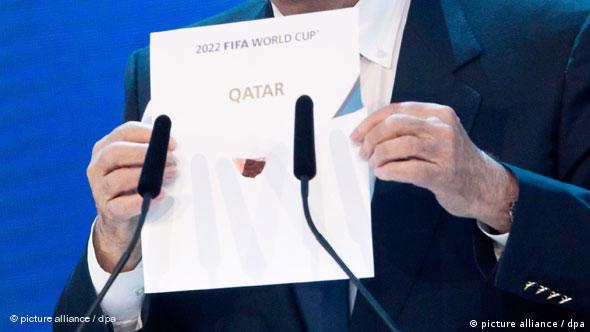 Platini told Bild that he approved the hosting of the 2022 World Cup in Qatar with two provisos: firstly that it would take place in winter, not in summer as is traditional, and also on the condition that it wouldn't be solely in Qatar.

"Because of the heat, the World Cup must be played in the winter," Platini said. "When it's more than 40 degrees Celsius (104 Fahrenheit), you can't really play football, and it would pretty tough for the fans to bear. Also, the neighboring emirates must be incorporated so that the World Cup takes place in the entire region."

A new idea for an old agreement

Temperatures in Qatar can frequently top 40 degrees Celsius in the summer. The average temperature in December and January is a less intense 17C.

A winter appointment would clash, however, with competitive domestic football in the majority of European countries. Traditionally, the World Cup is a summer event played out in June and early July - timed to coincide with the soccer off-season in Europe and most of the northern hemisphere. The wealthy European clubs almost always employ the vast majority of players who compete at modern World Cups - including the stars from other parts of the world.

There was no mention of a rescheduling during Qatar's World Cup bid, which beat out challenges from the US, Australia and a joint application from 2002 co-hosts Japan and South Korea. Indeed, the organizers had pledged air-conditioned stadiums specially built to ward off the scorching summer sun.

"All our stadiums, training sites and fans zones will be at 27 degrees Celsius, all solar-powered and 100-percent carbon neutral," Hassan Al-Thawadi, the Qatar bid's CEO, said at the time. "The application for this technology goes far beyond the stadiums."

Euro 2020 to be held in several European cities

Europe's football governing body UEFA plans to stage the 2020 European Championship in cities across the continent. The move is meant to ease the financial burden of hosting such a major sporting event. (06.12.2012)

French football legend Zindeine Zidane and future Bayern Munich coach Josep Guardiola were among the soccer and sporting luminaries recruited to support the cause of the wealthy Arab Emirate Qatar - a country with neither a rich footballing heritage nor a competitive national team - during an application campaign plagued by allegations of corruption within FIFA.

Theo Zwanziger, the former president of Germany's DFB football federation, was one of the highest-profile football figures to later call for investigations into whether Qatar won the vote fairly after more specific allegations of vote buying surfaced. Under considerable pressure, FIFA's Blatter ultimately established an ethics committee and appointed an internal investigator look into the allegations.

Platini also told Bild that plans for a pan-European Euro 2020 competition incorporating 13 different capital cities would be going ahead as planned.

"This is a really great adventure. We will be doing it," Platini said.