Initial investigations into "sophisticated" attacks on oil tankers in the Strait of Hormuz point to a "state actor," said the United Arab Emirates. The US has claimed Iran is behind incidents that damaged four vessels. 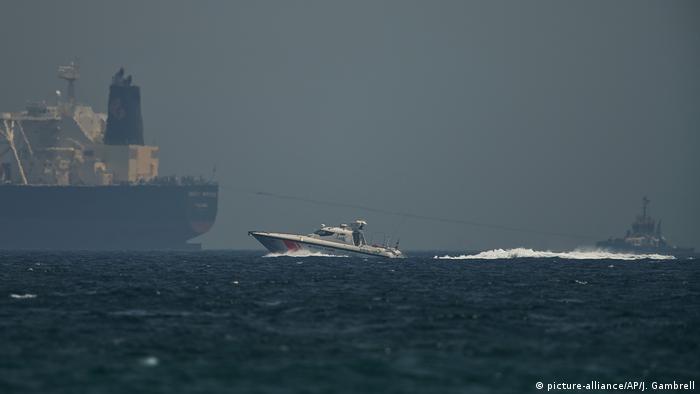 The United Arab Emirates has said it believed the apparatus of a foreign state was behind attacks on four tankers off its coast earlier this month.

In a briefing to the United Nations Security Council, the UAE did not identify any country in particular, but said the operation had been sophisticated and coordinated.

The May 12 attacks saw two Saudi tankers, an Emirati vessel and a Norwegian oil carrier targeted with limpet mines placed below their waterline. Although there were no casualties, the incidents have fueled already inflamed tensions between the United States and Iran.

The UAE was joined by Norway and Saudi Arabia, which are among several countries conducting investigations, in giving its opinion.

The three countries said the attack would have involved the expert navigation of fast boats, and the use of trained divers who placed limpet mines on the vessels with a high degree of precision.

"While investigations are still ongoing, these facts are strong indications that the four attacks were part of a sophisticated and coordinated operation carried out by an actor with significant operational capacity, most likely a state actor," the three countries said in the document.

UN National Security Adviser John Bolton said on May 29 that the attacks involved "naval mines almost certainly from Iran." The Iranian government has denied the allegations.

The investigation comes amid weeks of escalating rhetoric between Tehran and Washington as the US ratchets up pressure on Iran over alleged threats against US interests in the region.

Saudi Arabia's King Salman has warned that Iran's aggression is a "grave danger" to the security of maritime traffic. Iran said it regretted the king's "abuse" of his country's "privilege." (01.06.2019)