A typhoon approaching Japan has forced precautions at the Fukushima nuclear power plant. The Japan Meteorological Agency has advised people to be prepared to leave their homes quickly and to avoid unnecessary travel. 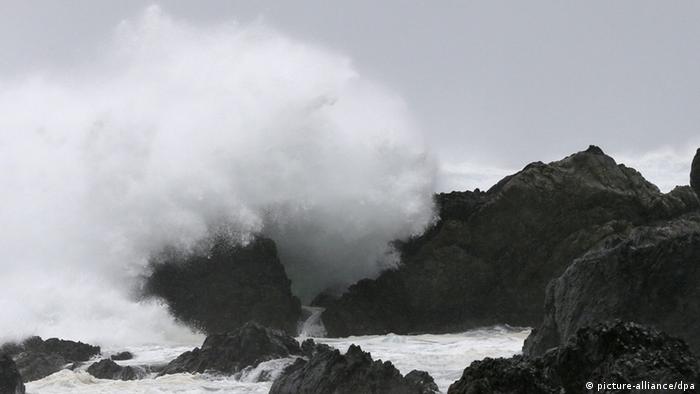 Typhoon Wipha appears on course for the capital, Tokyo, as it moves across the Pacific. It is expected to make landfall during the morning rush hour on Wednesday, bringing hurricane-force winds to the metropolitan area of 30 million people. By midday Tuesday, Wipha sat just a few hundred kilometers off the coast of Japan as it headed north-northeast at a speed of 35 kilometers per hour (20 mph).

"It is the strongest typhoon in 10 years to pass the Kanto region," Hiroyuki Uchida, the Japan Meteorological Agency's chief forecaster, told a news conference, referring to Tokyo and its vicinity.

The storm weakened as it approached but still packed sustained winds of about 140 kph, with gusts nearing 200 kph, the agency reported. Scientists expect the typhoon to sweep through northern Japan after making landfall. It is likely to pass near the crippled Fukushima nuclear power plant, on the coast and 220 kilometers (130 miles) northeast of Tokyo, later on Wednesday.

The operator of the Fukushima nuclear plant, Tokyo Electric Power Corp (TEPCO), which has struggled to contain radioactive leaks, announced that it would cancel all offshore work and decide whether to continue onshore operations after assessing the weather. The utility will also take down cranes and secure all cables, hoses and machinery.

"We are making preparations for proper management of contaminated water ... We will patrol places that could have inflows of water," a company spokesman said.

TEPCO announced plans to pump out rain that falls into protective containers at the base of some 1,000 tanks storing radioactive water, a byproduct of Fukushima's cooling system, which engineers rigged to maintain control over the reactors wrecked in a 2011 earthquake and tsunami.

The rainwater that builds up will be pumped into an empty tank, checked for radioactivity and, if uncontaminated, released into the sea, TEPCO announced.

Typhoon Wipha represents the strongest storm to approach eastern Japan since October 2004. That cyclone triggered floods and landslides that killed almost 100 people, forced thousands from their homes and caused billions of dollars in damage.

The East Japan Railway announced that it had canceled 31 bullet trains going north and west from Tokyo.