Japan's southern regions are bracing for the second typhoon in a week. Seven prefectures have ordered mass evacuations, but the movement of people is being hampered by coronavirus distancing measures.

Late Sunday night, the southern island of Kyushu was bracing for the full force of the powerful typhoon.

"This typhoon is headed toward and may potentially make landfall in Kyushu, bringing record rains, winds, waves and high tides," Prime Minister Shinzo Abe said at a meeting with cabinet ministers. "I am asking that people exercise the utmost caution."

Winds were expected to reach 216 kilometers per hour (134 miles per hour). The village of Tokara in Kagoshima prefecture received 71 millimeters (2.8 inches) of rain in just one hour. Rainfall of up to 500 millimeters was forecast for southern Kyushu, leading to possible landslides. 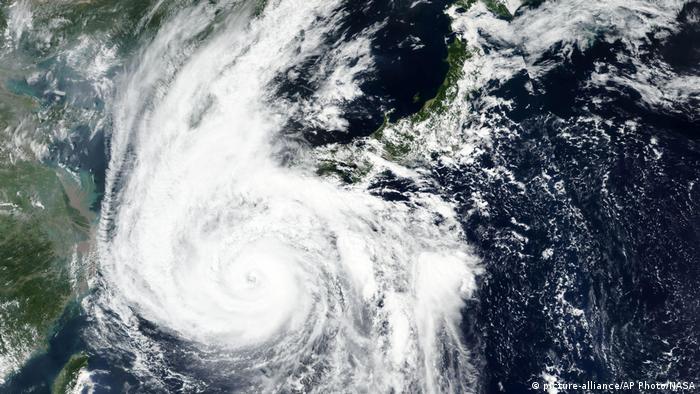 The typhoon has cut power to at least 180,000 homes, and forced public transport to halt.

At least 13 people were injured on Kyushu ahead of the main arrival, according to Kyodo News.

People in areas across seven southern prefectures were urged to evacuate, according to public broadcaster NHK.

Some 1.8 million people were ordered to leave immediately and 5.6 million were issued lower-level advisories to evacuate.

Efforts were hampered by coronavirus social distancing, with some centers forced to turn people away.

More than 580 flights from the island of Okinawa and southern Japan have been canceled for Monday following similar cancellations on Sunday, according to NHK, while bullet train services in southern and western Japan were suspended.

The coast guard has suspended its search for dozens of missing crew members from a capsized livestock ship in the East China Sea.

The storm was expected to move north, then leave the western coast of Kyushu and reach the Korean Peninsula by Monday morning.

Haishen, equivalent to a Category 2 hurricane, is the second typhoon to hit southern Japan within a week, after Typhoon Maysak passed near Kyushu and Okinawa, injuring dozens of people.

North Korea has been grappling with torrential rains, floods and typhoons in one of the worst rainy seasons on record. The government says local officials failed to provide relief to people affected by Typhoon Maysak.