The daughter of Ukraine's jailed opposition politician has called on Germany to help her mother. Yulia Tymoshenko claims to have been beaten by jail wardens and has been on hunger strike for more than a week. 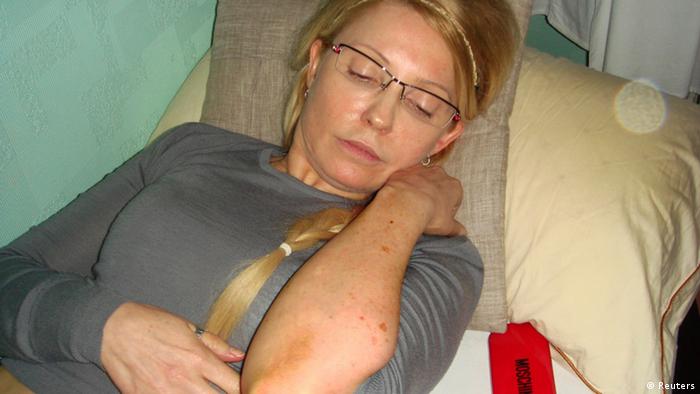 The daughter of jailed Ukrainian opposition leader Yulia Tymoshenko has made an urgent appeal to Germany to help her mother.

"Save my mother's life before it is too late," Yevhenia Tymoshenko said in an interview with the Sunday paper Frankfurter Allgemeine Sonntagszeitung. The opposition leader's daughter added that if her mother was allowed to die, Ukraine's democracy would go to the grave with her.

"My mother's fate and that of my country are one and the same. If she dies, democracy also dies," she said, describing her mother's condition as "very weak."

There have been growing concerns in the West about the Ukrainian politician's health, particularly since April 20, when she announced she was beginning a hunger strike.

She has been complaining of acute back pain and was moved from prison to a hospital last weekend. She claims to have been physically abused by wardens who forcibly removed her from the jail and took her to the hospital.

A call for travel bans, no soccer tournament boycott

Yevhenia Tymoshenko used the interview, excerpts of which were released by the paper on Saturday, to call on Germany to push the European Union to impose sanctions, banning close associates of Ukraine President Viktor Yanukovitch, Tymoschenko's political rival, from entering EU countries.

At the same time, she said her mother opposed the idea of a boycott of the upcoming European soccer championship, which is to be hosted by Poland and Ukraine this summer. She said the tournament was a symbol of Ukraine's integration into Europe and would offer a stage for opposition protesters. However, she said he mother didn't want "German and European politicians to appear alongside President Yanukovitch, neither inside a stadium or elsewhere."

Tymoshenko is serving a seven-year jail sentence after being convicted of abuse of power last October over a gas deal with Russia while she was prime minister.

She is facing a separate trial for tax evasion, but the court surprised many on Saturday by postponing it until May 21.

"The court has ruled that it is impossible to hear the case in the absence of Tymoshenko," Judge Kostiantyn Sadovsky said after conceding that Tymoshenko could not attend the trial due to chronic back pain.

Tymoshenko has been refusing to be treated by Ukrainian doctors, saying she didn't trust them. Berlin's Charite hospital has offered to treat her but so far, Ukrainian officials have refused to allow her to be moved to Germany for treatment.

German Foreign Minister Guido Westerwelle criticized the reported treatment of Tymoshenko, telling the Frankfurter Allgemeine Sonntagszeitung that "contrary to every legal and moral duty, (she is) being denied adequate medical treatment in the Ukraine."

Westerwelle added that if the reports of her being assaulted were true, it would be difficult to return to business as usual.