Prime Minister Trudeau has called the shooting in the eastern Canadian city a "terrorist attack." The gunmen, whose motive remains unknown, opened fire during evening prayers. 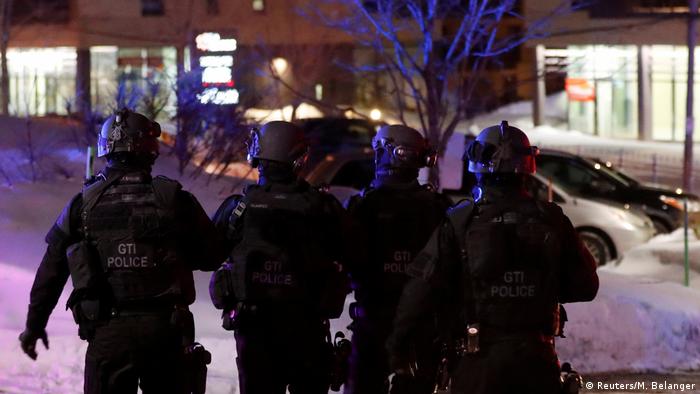 The gunmen began shooting at the Quebec City Islamic Cultural Center on Sunday night when some 50 people were inside the mosque. The attack took place around 8:00 p.m. local time (0100 UTC).

"We condemn this terrorist attack on Muslims in a center of worship and refuge," the Prime Minister wrote in a statement.  "Muslim-Canadians are an important part of our national fabric, and these senseless acts have no place in our communities, city and country."

Authorities were also treating the shooting as a terrorist attack, Quebec police spokesperson Christine Coulombe said. Police arrested two suspects but did not provide further information due to the probe being in its initial stage. They did, however, refute earlier witness statements that a third gunman may have been involved.

The motive for the attack was not clear.

Though five deaths were initially reported, Coulombe confirmed the gunmen had killed six individuals between the ages of 35 to 70 and wounded eight more, some of them seriously. Of the approximately 50 individuals who were in the mosque at the time of the attack, 39 escaped uninjured, she added.

The mosque's president, Mohamed Yangui, who was not in the mosque at the time of the attack but received frantic calls from the prayer attendees, said the shooting took place in the men's section of the mosque and children may have been among the victims.

Shortly after the shooting occurred, a heavily armed tactical squad was seen entering the building. Police later reported they had secured the premises and evacuated all occupants.

In an early Monday morning press conference, the visibly-shaken Quebec city mayor, Regis Labeaume, expressed his horror at the attack. "No person should have to pay with their life, for their race, their color, their sexual orientation or their religious beliefs," he said.

In addition to his statement, Trudeau tweeted his condolences to those directly affected by the shooting.

Quebec's Premier, Philippe Couillard, called for unity in the face of violence. "Solidarity with Muslims of Quebec," he tweeted.

Couillard also announced solidarity rallies would take place across the city on Monday.

It is not the first attack on a mosque in Canada. In 2013 police investigated after a mosque in the Saguenay region of Quebec was splattered with pig's blood. In 2015, a mosque was set on fire in the neighboring province of Ontario. And last year, a pig's head was left on the doorstep of the same mosque where Sunday's shooting took place.

Canada's southern neighbor also reacted to the attack. In a series of tweets, New York City Mayor Bill de Blasio expressed his condolences for the victims. He called on New Yorkers to remain vigilant and united and announced that the New York Police Department would be providing extra protection at mosques throughout the city.

The Quebec mosque shooting comes in the wake of US President Donald Trump's order banning citizens from Yemen, Somalia, Iraq, Iran, Libya, Syria and Sudan, all Muslim-majority countries, from traveling to the US and suspending the US refugee program. Large protests opposing the order sprang up across the United States, and many international leaders criticized the ban as discriminating against Muslims - including Trudeau, who said that Canada would continue to welcome refugees. 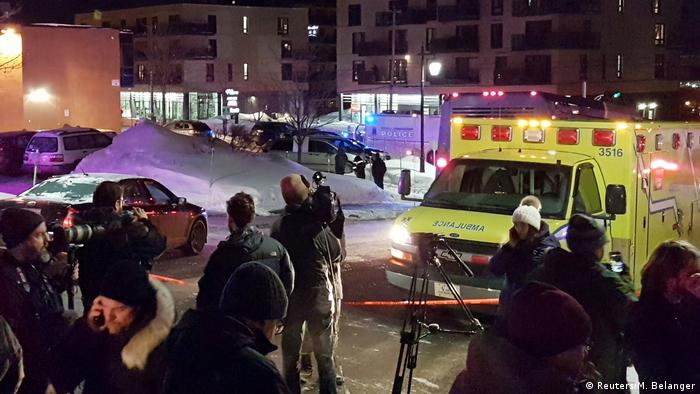 Quebec police evacuated and sealed off the mosque

A suicide bomber has blown himself up at a mosque in a Pakistani tribal area. Dozens have been killed or wounded, as the country grapples with a wave of attacks by the Pakistani Taliban. (16.09.2016)