For the first time since the destruction of Palmyra by the IS, two artworks from the city have been restored. Italian archaeologist Maria Laurenti spoke with DW about the political hurdles and challenges of restoration. 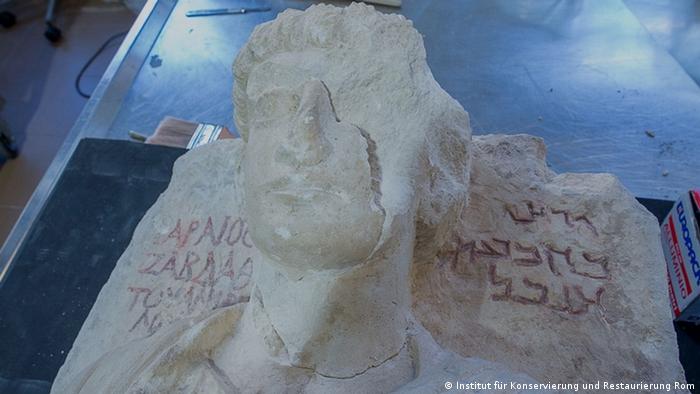 Since the barbaric destruction of Syria's Palmyra, the ancient city has become a symbol of the brutality of the terror organization "Islamic State" (IS). Now, the Italian "Istituto Superiore per la Conservazione ed il Restauro" (High Institute for Conservation and Restoration) has carefully reconstructed and restored two tomb figures. The group says it's the first time artworks destroyed by the IS have been restored.

DW: How did this restoration project of the two tomb sculptures from Palmyra come about?

Maria Concetta Laurenti: The two busts had formerly been exhibited at a museum in Palmyra. After the seizure of Palmyra by IS, those fighters used hammers and other devices to damage them and throw them to the ground. They were particularly intent on destroying the facial features and the religious symbols. When Syrian authorities regained control of these sites… 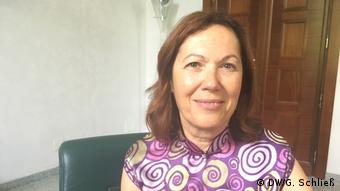 …we're talking about the Assad regime?

No, Assad did not contact us; Syrian museum officials did. But I would like to make something very clear: Our goal is the restoration of World Heritage Sites and artifacts. We are not interested in political labeling.

It was the Directorate-General of Syria's Antiquity and Museum Administration, which is part of the Syrian government, who contacted us. The sculptures that had been recovered in Palmyra were brought to a museum in Damascus, and that's when we entered into the picture.

Read: Syrian government retakes ancient city of Palmyra from IS

In October 2016, we exhibited the two sculptures and other artworks from Syria that had been recovered in the Colosseum Museum in Rome. We started restoring the two tomb sculptures after that.

What were the some of the greatest challenges in restoration?

With the female bust, we only assembled the pieces we had available to us. The greatest challenge was the male bust. We had to completely reconstruct the face since most of it was missing. We wouldn't have been able to do that using conventional methods.

How were you able to do it then?

Had something like that been done before, or was it a pioneering measure? 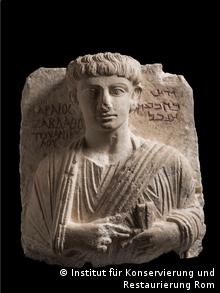 3D technology was employed to restore this male bust

We are perhaps the first to use the mirroring method in the area of restoration. But the truly decisive and novel part of our method is its reversibility. That means that our additions can be taken off, since we only attached them to the face with really strong magnets.

The reversibility was also part of the discussion when you spoke with Syrian officials. You said that the Syrians wanted a seamless reconstruction of both of the busts. But your Institute for Conservation and Restoration has a different aim.

I think that we found a compromise. The Syrians received two restored busts, and we were able to remain true to our principles of not completely polishing over the traces of history, including the destruction.

You gave the two restored tomb sculptures back to the museum in Damascus. Wasn't that a bit premature? After all, the war is not over and they could be destroyed again. And who says that the Assad regime will be around when the war is over?

We don't see it that way. We gave back these artworks to what we see as their rightful owner, namely the director of the National Museum in Damascus. We did not give them back to Palmyra, but to the museum from which we received them.

We're quite optimistic, and we know that there is a safe bunker there. And we have a clear conscience. After all, these artworks do not belong to us.

The Prussian Cultural Heritage Foundation in Germany is very active in Palmyra and at other historical sites. Are you cooperating with the foundation?

No, it was a completely bilateral project between us and the Syrian side. And, the way it looks, we were the first ones to do it. We have no plans to cooperate with the foundation, especially because we have no plans to restore other artworks from Palmyra.

Maria Concetta Laurenti is an archaeologist at the "Istituto Superiore per la Conservazione ed il Restauro" in Rome, which is one of Italy's important instruments of cultural diplomacy.

Franco-Swiss film director Jean-Luc Godard was the most radical of the Nouvelle Vague filmmakers. He revolutionized French cinema, and refused honorary awards.