Two German navy ships in Mediterranean to save migrants in distress

The German navy has sent two ships as part of efforts to prevent migrants from dying in the Mediterranean. The EU was spurred into action after a migrant ship capsized, killing around 800 people a few weeks ago. 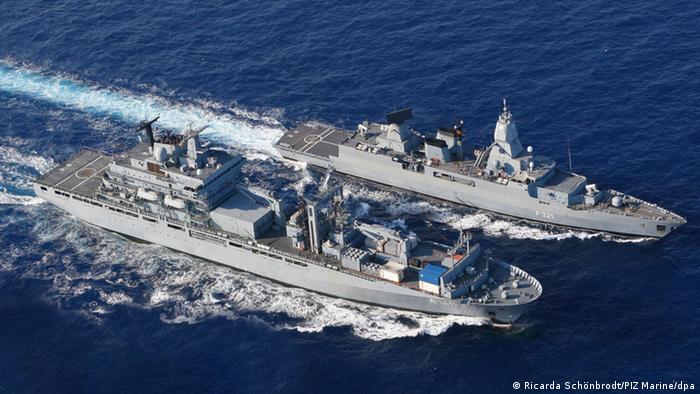 The two vessels, the combat support ship Berlin and the frigate Hessen, were dispatched from the Horn of Africa region and passed through the Suez Canal and into the Mediterranean Sea on Friday.

A German navy spokesman in Rostock told the DPA news agency that the two ships were expected to dock at Souda on the Greek island of Crete on Saturday. There they were to pick up supplies such as blankets and food.

The frigate is equipped with a radar system that would allow it to locate migrant boats as far as 40 kilometers (25 miles) away. It would also be capable of picking up up to 100 people in distress.

The combat support ship, on the other hand, is equipped with a military hospital and has the capacity to treat 250 people for two days.

The ships are set to take up their work in the Mediterranean despite some reports that not all of the details of their mission had been cleared up. They had been part of the European Union's Operation Atalanta to combat piracy.

Citing a German army source, DPA said that the ships would be operating independent of the EU's border agency Frontex, which is focussed on securing the bloc's outer border rather than picking up migrants in distress.

The source also said that the two German ships would not be tasked with trying to catch human traffickers who take money from would-be migrants.

German Defence Minister Ursula von der Leyen announced a week ago that she had ordered the two ships to redeploy to the Mediterranean as swiftly as possible.

"This is first and foremost about helping people in distress in the Mediterranean, and saving refugees from drowning," she said.

France and Britain are among EU countries that pledged during last month's Brussels summit to send more ships to the Mediterranean cope with the problem. The leaders also agreed to triple funding for the Triton border protection mission.

The conflicts in Syria and Libya have contributed to a major increase in the number of migrants attempting the crossing. The emergency summit was called in light of the capsizing of one boat off the coast of Libya a few days earlier, in which an estimated 800 people lost their lives.

The European Commission's president has called for refugee quotas for EU countries and more legal migration. Europe's leaders are discussing ways to stop thousands of migrants dying in attempts to reach the continent. (29.04.2015)