Turkmenistan′s president poised to win election | World| Breaking news and perspectives from around the globe | DW | 11.02.2012

The people of Turkmenistan will be going through the motions of voting for president this Sunday. But there is no doubt who will win - the authoritarian incumbent Gurbanguly Berdymuhamedov. 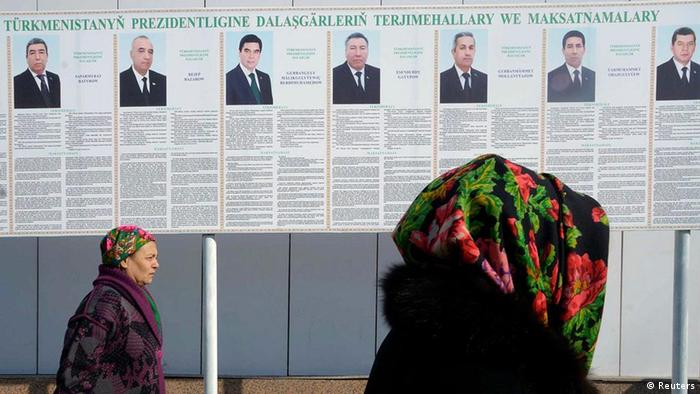 The opposition candidates were carefully selected

There are several candidates on the ballot to challenge incumbent Gurbanguly Berdymuhamedov in Turkmenistan's presidential elections this coming Sunday (February 12). But there is no doubt that Berdymuhamedov, who has ruled the Central Asian country since the death of dictator Saparmurat Niyazov in December 2006, will be declared the clear winner.

"In reality, the seven candidates lined up against Berdymuhamedov are puppets of the presidential palace," said Tadzhigul Begmedova, leader of the Turkmen Helsinki Foundation, a human rights organization based in Bulgarian exile. "Many voters don't even know who the candidates are. The system is so apolitical that lots of people just aren't interested. And that's because everyone knows that the main candidate will win by a large margin." 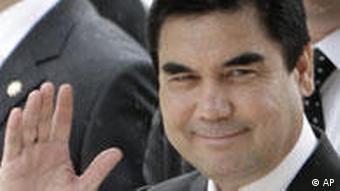 President Berdymukhamedow is making sure he stays on

However, many Turkmen will show up to vote, Begmedova said: "Definitely the families of employees and students, because they are closely watched by the authorities."

The former Soviet republic has been under authoritarian rule for more than 20 years. There are no opposition parties, independent media, or organizations critical of the government. Human rights activists also accuse the government of holding political prisoners in the landlocked country.

Nurmuhammet Hanamov, one of the leaders of the Turkmen opposition in exile, recalled that Turkmenistan already held a similar "election" in 2007. Berdymuhamedov, who was then the vice president, was declared president and successor to the "Turkmenbashi" - the "Father of all Turkmen," as the late Niyazov called himself. 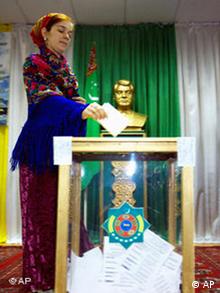 The OSCE won't be monitoring the election

The "opposition candidates" were carefully selected by the state leadership, Hanamov said. "When they have fulfilled their purpose, they will no longer be needed."

Human rights activist Begmedova is convinced that the "challengers" in the presidential election are intended to serve as "concessions" to the West, which has unsuccessfully pressured the country for years to adhere to democratic procedures.

Along with the other successor states to the Soviet Union, Turkmenistan jointly recognized the Helsinki Final Act, as well as other obligations for what is now the Organization for Security and Cooperation in Europe, in 1992. As a result, the OSCE's Office for Democratic Institutions and Human Rights (ODIHR) observes and evaluates elections in OSCE member states. Until now, no election in Turkmenistan has been declared free or fair by the OSCE.

The OSCE is not planning to send any election observers to the forthcoming presidential poll, Andrei Muntean, of the OSCE office in the Turkmen capital Ashkhabad, told DW.

Begmedova is not surprised: “The OSCE is not sending any observers, because we know in advance that the elections will not be held in the way that they should.” She said that there is little desire to anger an authoritarian ruler who controls large natural gas reserves.

Both the West and Russia want Turkmenistan's enormous gas resources for themselves. Europe needs the gas if it wants to ease its dependency on Russian deliveries. The EU would like the planned Nabuco pipeline to carry gas from Turkmenistan from the Caspian Sea to the west. As a neighbor of Iran and Afghanistan, Turkmenistan is also strategically important.

On February 12, Turkmenistan elects a new president - and it's almost certain that the old one will win. Division head Mathis Winkler explains why DW Akademie held an election reporting workshop there. (03.02.2012)

In yet another act of improving bilateral relations, India and Pakistan have announced progress on a gas pipeline project also bringing into the fold Turkmenistan and Afghanistan. (27.01.2012)