President Recep Tayyip Erdogan has inaugurated an Islamic center built in the style of an Ottoman mosque and sponsored by Turkey. Erodgan has fended off charges of authoritarianism and says Islamophobia is on the rise. 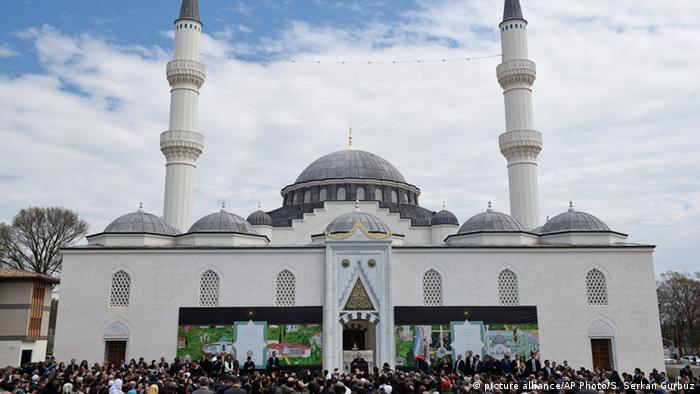 Erdogan cut the ribbon on the $110 million (99.5 million-euro) Diyanet Center of America on the outskirts of the US capital city Saturday, saying Muslims face growing prejudice around the world.

"Unfortunately, we are going through a rough time all around the world," Erdogan said. "Intolerance towards Muslims is on the rise, not only here in the United States but also around the globe."

Erdogan has courted controversy at home for his fiery rhetoric in branding his political enemies "terrorists" and is no less a polarizing figure on trips abroad.

On Thursday Erdogan's security detail clashed with reporters and protesters. The president's guards removed one Turkish opposition reporter from the speech room, kicked another and threw a third to the ground outside the Brookings Institution in a melee that provided Washington's foreign policy elite a firsthand glimpse at the state of the press in Turkey.

"We have increasingly seen disrespect for basic human rights and press freedom in Turkey," US National Press Club president Thomas Burr said. "Erdogan doesn't get to export such abuse."

The following day US President Barack Obama said Washington had expressed its concerns about authoritarian tendencies in Turkey.

"It's no secret that there are some trends within Turkey that I have been troubled with," Obama said Friday. "I think the approach they have been taking toward the press is one that could lead Turkey down a path that would be very troubling." 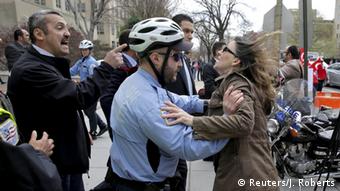 Reporters Without Borders ranked Turkey 149th out of 180 countries for press freedom in 2015, citing the widening clampdown on critics of the president

Domestic political rhetoric in the US has been particularly poisonous among Republican Party presidential frontrunners, a theme that Erdogan seized upon as he condemned terrorism and those who commit violence in the name of Islam.

Erdogan also noted that the recent attacks in Brussels and Paris paled in comparison to the level of bloodshed that Turkey has endured with bombings in Istanbul, Ankara and the southeast.