Turkish police use force to break up pro-secular education rally

Turkish police have moved in to forcibly break up a demonstration in the capital, Ankara. The authorities said the protest, organized by a teachers' union, was illegal. 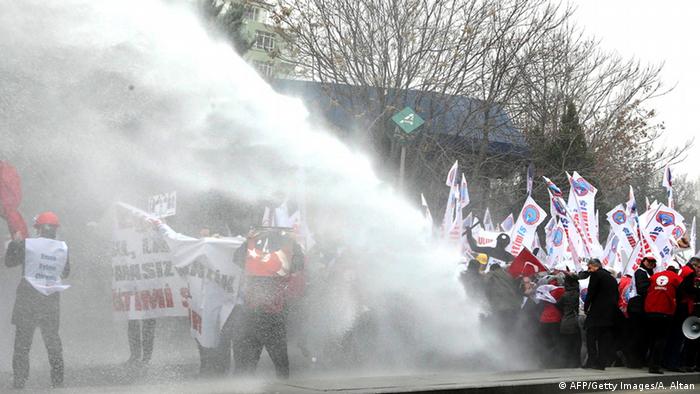 Police used pepper spray, tear gas and water cannons to disperse demonstrators who had assembled in the Kizilay district of Ankara on Saturday. Some reports said as many as 100 people had been arrested by police, including the head of the Egitim-Is teachers' union, Veli Demir.

A video posted on the website of Turkey's Hurriyet newspaper showed protesters, some of whom were holding large banners, being driven back by the flow of water coming from water cannons mounted on police trucks. Later, what appear to be dozens of protesters are led away by police officers wearing riot gear.

The union organized the rally to demonstrate in favor of secularism in Turkey's education system, as required by the country's constitution.

Some fear that this could be threatened by President Recep Tayyip Erdogan, who founded the ruling Islamic-rooted Justice and Development Party. He has recently made statements on education, which some have interpreted as a signal that he is planning to bring more religion into the classrooms.

Last year, Turkey's parliament lifted a long-standing ban on Islamic headscarves in the civil service and this past September, it removed a ban on female students wearing them in high schools.

At odds with the EU

Erdogan has also faced growing international criticism in recent months. Leading up to local elections in March, while he was still prime minister, Erdogan manged to temporarily ban the social media websites Twitter and YouTube, after they were used to disseminate tapped compromising phone calls that cast corruption suspicions on members of his inner circle. The bans were subsequently overturned by Turkey's constitutional court.

More recently, he has been at loggerheads with the European Union, which Turkey is seeking to join, over thearrests of more than 20 people, including the editor of Turkey's biggest-selling newspaper. Those arrested have links to US-based Muslim cleric Fethullah Gulen, who is Erdogan's former political ally but is now his arch foe.

The EU's foreign policy coordinator, Federica Mogherini, and Englargement Commissioner, Johannes Hahn, condemned the raids ass "incompatible with the freedom of the media."