Recently released newspaper editor Can Dundar said he would expose the government's 'crimes' when his case goes to court. The Turkish president and prime minister have denied his trial is a case of free speech. 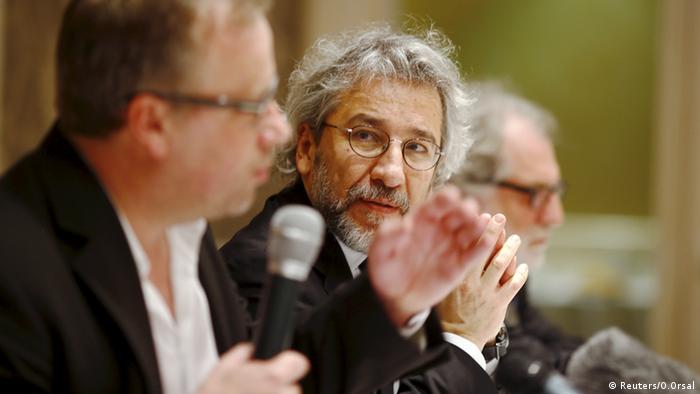 Speaking at a news conference in Istanbul on Wednesday, Can Dundar said his release pending trial was a "clear defeat" for Recep Tayyip Erdogan.

Dundar, the editor-in-chief of secularist opposition newspaper "Cumhuriyet," and his colleague Erdem Gul were freed last week after the Constitutional Court ruled that their detentions had violated their rights.

Their trial is due to start on March 25. Dundar said he would defy an order to surrender his passport and would attempt to travel overseas. 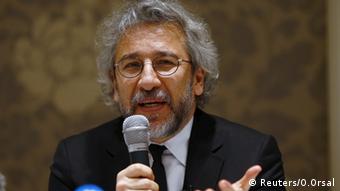 "Erdogan is having trouble accepting the ruling because this was a clear defeat for him. We have a president who is not accustomed to defeat," Dundar said at the news conference, where he appeared alongside Christophe Deloire of Reporters without Borders.

"The words Mr. Erdogan used ... are setting up a climate of intimidation and even threats against journalists. What he does is really dangerous," Deloire said.

Dundar and Gul were arrested last November and charged with aiding an armed terrorist organization and publishing material in violation of state security.

He said going to jail was par for the course for independent Turkish journalists.

"If you are a journalist in Turkey, going to prison will be part of your career plan," he said. "We are journalists, not civil servants. Our duty is to inform the public, including about the illegal acts of the government."

Dundar denounced the "climate of fear propagated by the Erdogan regime among journalists."

The court's decision, which affirmed Dundar and Gul were acting as journalists, should pave the way for an acquittal at the hearing next month, but Dundar said it was unclear how the judiciary would now act after Erdogan's intervention. 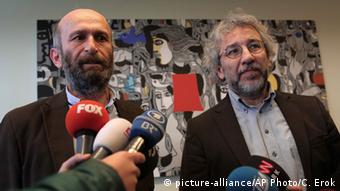 Erdem Gul and Can Dundar

The court's chairman Zuhtu Arslan has defended the decision.

"Decisions taken by the Constitutional Court using its authority are binding for everyone and every institution," he told a legal conference in Ankara on Tuesday. "We are doing our job. We do not look at who is making the application. We are not on anybody's side or against anyone."

Erdogan has said the case was not about press freedom but about espionage. He condemned the Constitutional Court's ruling.

"This has nothing to do with press freedom. This is a case of spying," he said on Sunday. "I don't concur with the decision and I have no respect for it," Erdogan told reporters before leaving on a week-long trip to Africa.

The president's comments were echoed on Wednesday by Prime Minister Ahmet Davutoglu who said it would be wrong to let the Constitutional Court's decision affect the two men's trial. Speaking at a news conference, Davutoglu said the case should not be viewed as a freespeech issue.

Turkish Justice Minister Bekir Bozdag on Tuesday told parliament the ruling was a "clear violation of the constitution and law."

Criticism of the EU

Dundar had harsh words for the European Union for failing to press Turkey over basic rights such as freedom of expression. He claimed Brussels was too focused on securing Ankara's cooperation in stemming the flow of migrants from the Middle East to Europe to address rights abuses.

"While we were in prison, there was bargaining going on over money for refugees. We see this as dirty bargaining to keep refugees off European territory," he said. "It appears Europe is willing to concede its long-term principles for short-term gains."

Turkish President Recep Tayyip Erdogan dismissed the release from jail of two Turkish journalists accused of spying. He said he would neither "respect" nor "obey" the decision. (28.02.2016)

Turkey's Constitutional Court has ruled that the rights of two leading journalists detained since November have been violated. They reported on alleged weapons' supplies to Islamists in Syria. (25.02.2016)