A Turkish army general has appeared in a civilian court, accused of seeking to overthrow the government. Prosecutors say political meddling by the military must be stopped, but there are fears of a more sinister motive. 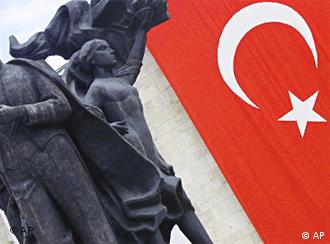 Turkey's military and the ruling party are at odds

In what is seen as a landmark case, one of Turkey's most senior military commanders appeared Monday in front of civilian judges on charges of seeking to undermine the government.

General Bilgin Balanli was set to head Turkey's air force until his detention three months ago, but now he is the latest to be singled out by prosecutors who claim he was involved in an army conspiracy to topple the government. Hundreds of other military officers have been detained as part of the probe, called Sledgehammer.

Turkish daily newspaper Taraf has been at the forefront of exposing the plot, claiming that many of the country's institutions were involved.

"It's very important," said deputy editor Yasemin Congar, who believes the trials will lead to greater democracy and reduce corruption. "It's basically about digging out the dirt within the state and digging out all these secret institutions and secret organizations, which are allegedly behind many crimes in this country." 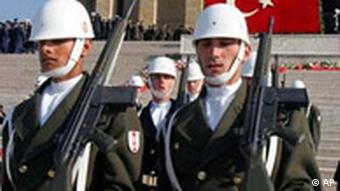 The case is the second trial in connection with the conspiracy. In December, 200 officers went on trial on similar charges.

Prosecutors say there was an elaborate plan to cause chaos in the country, including provoking a conflict with neighboring Greece and bombing mosques in Turkey.

The army has a history of meddling in politics, having forced four governments from office since 1960. Tensions between Turkey's secularist military and the ruling Islamist-rooted Justice and Development Party (AKP) Party of Prime Minister Recep Tayyip Erdogan have been building for years.

Political analyst and retired Brigadier General Haldun Solmazturk claimed this particular probe is a political witch hunt instigated by a government intent on consolidating its power.

"It's aiming for one-party rule. They don't like democracy," said Solmazturk. "Once they eliminate the army there is not any other power that can challenge one-party rule, one-party regime. That is why the government has been so adamant in supporting this unjust justice system."

Questions over the origin of the evidence against the accused are growing. Earlier this year the police were forced to admit that they had planted evidence on one of the accused officers. 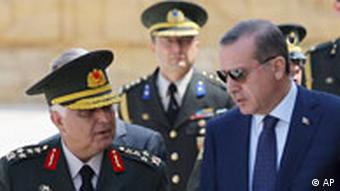 Concern has been increasing, both domestically and internationally, over the duration of the investigations. They've gone on for four years now, but still there haven't been any convictions.

Along with army officers, many of those on trial include journalists and well-known critics of the government.

The head of the AKP's parliamentary foreign affairs committee, Volkan Bozkir, has dismissed the idea that the investigations are politically motivated.

"The courts are independent in Turkey. It's the system which decides, and according to the constitution, the courts and the executive power and the parliamentary power are separate," he said.

Earlier this month all of Turkey's most senior generals resigned en masse in protest at the investigations. But the resignations were widely seen as only further strengthening the government's control on the military.

Bringing the army under civilian control is a key demand of the European Union, which Turkey is still seeking to join. Turkey's EU accession aspirations are cited by the government as one reason to prosecute the cases vigorously.

However, with the fresh arrests of officers last week and the trials against senior military officials showing no signs of ending, concerns over the legitimacy of the probe are only likely to grow.

Last month's election victory made Turkish Premier Erdogan and his government stronger than ever. While Turkey continues to be an indispensable partner for the West, Erdogan's power and ambition are raising concerns. (10.08.2011)

Turkish court orders arrest of officers over plot against government

A court in Turkey has issued arrest warrants against 14 military officers for campaigning against the government. The move shows the civilian government gaining the upper hand over the army after decades of power play. (09.08.2011)

Opinion: Where are you going, Mr. Erdogan?

The internal political revolution in Turkey has reached new dimensions with the resignation of several high-level military leaders. DW's Baha Güngör wonders whether the government is now heading down the right path. (02.08.2011)