The Turkish president has brought together more than 20,000 people in the Bosnian capital to back his election bid. But some leaders are worried his growing influence in the Balkans could lead to regional instability. 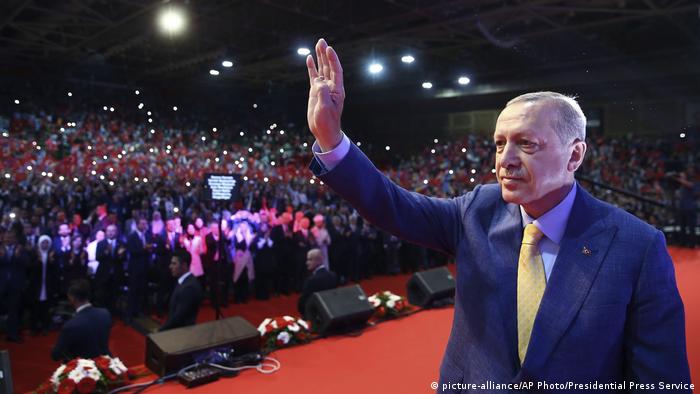 Turkish President Recep Tayyip Erdogan on Sunday rallied more than 20,000 people in the Bosnian capital of Sarajevo to bolster support ahead of parliamentary and presidential elections in June.

"Are you ready to support me with a record number of votes in the presidential election?" Erdogan asked the crowd.  At moments, the crowd chanted "Sultan Erdogan."

"I have one request from you: take an active role in the political parties in the countries you live in. You should take a place in those parliaments."

The event in Sarajevo was the only one of its kind scheduled in Europe after several EU countries banned campaign rallies, including Germany, the Netherlands and Austria.

The elections mark Turkey's official transition to an executive-style presidential system that some say will give the presidency too much power.

Some leaders in Bosnia-Herzegovina have expressed concerns about Erdogan's growing influence in the country, with Bosnian Serb leader Milord Dodik saying the Turkish leader was "interfering a lot" in the country's affairs.

But Bosnian Muslim leader Bakir Izetbegovic dismissed the allegations of interference as spite, saying there were "many frustrated Bosniak (Muslims) who do not like him in this country."

"What is the problem? The problem is that he is a powerful Muslim leader that we have not had for a long time," said Izetbegovic. "We will show that he has friends and that there are those who are proud of him."

Ahead of the rally, Erdogan met with Izetbegovic. During a joint press conference, the Turkish president acknowledged criticism of his visit, saying Ankara is only interested in helping the Balkan country develop.

"Our country has no secret agenda other than the welfare, unity and economic development of Bosnia-Herzegovina. Efforts to prove otherwise are futile."

But the Washington-based Center for European Policy Analysis (CEPA) has pointed to Turkey's growing influence in Bosnia-Herzegovina and the Balkans as a possible source of instability.

"Turkey's president portrays himself as a protector of Muslims in former Ottoman dominions. He also uses this image in domestic politics, as millions of Turkish citizens have Bosnian or Albanian backgrounds," said Janusz Bugajski, a senior fellow at CEPA.

"Initially seen as a useful supplement to the EU and the US, especially among the region's Muslim populations, Turkey's political interjections and self-declared 'neo-Ottomanism' are increasingly viewed with suspicion."

Turkey is heading for early elections on June 24. The winner of the crucial vote will wield extraordinary power, which is exactly what President Recep Tayyip Erdogan wants, says DW's Seda Serdar. (18.04.2018)