The Turkish president has lashed out at Germany after several cities canceled referendum rallies citing security concerns. Erdogan later said he would "make the world rise up" if he were not allowed to speak in Germany. 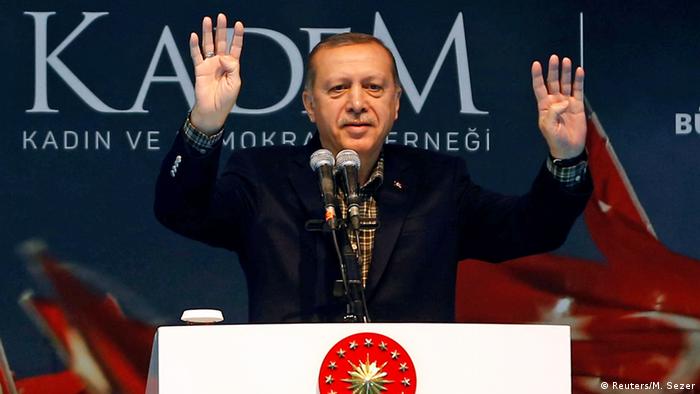 Turkey's prime minister said a call with the German chancellor went well. But tension remains between Berlin and Ankara after canceled Turkish rallies in Germany - one minister, however, found a venue for his speech. (04.03.2017)

Turks reflect on the heightened tensions between Berlin and Ankara following the cancellation of AKP rallies in Germany and the arrest of Die Welt journalist Yucel. Diego Cupolo reports from Ankara. (03.03.2017)

Opinion: Turkey-Germany quarrel out in the open

Tensions between Germany and Turkey have escalated. Chancellor Merkel needs to speak out strongly against a possible public appearance in Germany by President Erdogan, writes Jens Thurau. (03.03.2017)

Frechen has become the third German town in two days to cancel a rally by a Turkish government minister. The move threatens to worsen a dispute between Ankara and Berlin over the arrest of journalist Deniz Yucel. (03.03.2017)

"Your practices are not different from the Nazi practices of the past," Erdogan said at a women's rally in Istanbul, reported state-run Anadolu Agency.

His comments come ahead of an April 16 constitutional referendum that would see him receive considerably more power by doing away with the post of prime minister.

He did not appear to elaborate on precisely how the rally cancellations were similar to actions taken by the Nazi government under the dictatorship of Adolf Hitler, but he did suggest that Germany was acting undemocratically.

"You will lecture us about democracy and then you will not let this country's ministers speak there," said an incensed Erdogan, adding that Germany was not "respecting opinion and thought."

Escalating the tensions further, Erdogan later told a rally in Istanbul later on Sunday that he is prepared to come to Germany himself.

It was not immediately clear if the Turkish president has concrete plans to campaign in Germany for Turkey's proposed constitutional change to a presidential system.

Julia Klöckner, the deputy leader of Chancellor Angela Merkel's Christian Democrats (CDU) said Erdogan was "reacting like a defiant child who cannot have his way."

"The Nazi comparison is a new high point of intemperance. It is simply outrageous!" Klöckner told the German newspaper "Bild."

The CDU politician urged Erdogan to apologize for his comments, adding: "True statesmen do not speak like that."

Volker Kauder, who leads the CDU and its Bavarian sister-party the CSU in parliament, said he rejects Erdogan's Nazi Germany comparison "in the strongest terms."

"It is unbelievable and unacceptable that the president of a NATO member speaks about another member-state like that," Kauder said in the ARD program "Bericht aus Berlin."

"Especially one who has considerable problems with the rule of law," he added.

Minister to speak in Cologne

After two cancellations, Turkish Economy Minister Nihat Zeybekci plans to attend a referendum rally in a Cologne hotel on Sunday to gather support among expatriate Turks for the constitutional changes.

Zeybekci was supposed to attend an event in Cologne's Porz district and in the nearby town of Frechen, but both events were called off before the weekend.

A Cologne police spokesperson said that officers were preparing for the event although they did not expect demonstrations against the minister's presence in the western German city.

On Thursday, the southwestern German town of Gaggenau canceled a rally where Turkish Justice Minister Bekir Bozdag was due to speak, citing space and security concerns. Although they insisted that the move was not politically motivated, a bomb threat was later made against the Gaggenau town hall.

This week's rally cancellations angered the Turkish government, which accused Berlin of actively working against the "Yes" camp in the referendum. Ankara also summoned the German ambassador to the foreign ministry in protest.

Merkel spoke with Turkish Prime Minister Binali Yildirim on the phone on Saturday in an attempt to diffuse tensions. The two countries' foreign ministers are due to meet later this week.

Turkey's referendum campaign in Europe has been met resistance and further cancellations in other countries.

On Sunday, Austrian Chancellor Christian Kern called for an EU-wide ban on Turkish referendum campaigning while the Netherlands criticized a planned Turkish rally in Rotterdam this week but stopped short of banning it. Dutch right-wing politician Geert Wilders on Sunday called for an end to Turkish officials visitng the Netherlands until after the constitutional referendum.