Violence in Kurdish cities in Turkey has been spiraling out of control as the military uses force, including tanks, to root out Kurdish militants. Rights groups say dozens of civilians have been killed. 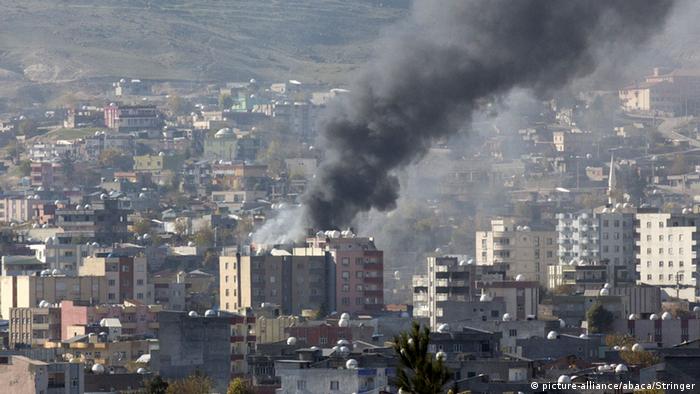 Turkish tanks shelled the southeastern town of Cizre on Tuesday in a growing military operation to root out Kurdistan Workers' Party (PKK) militants, but rights groups and Kurdish politicians say weeks of military operations have killed dozens of civilians and uprooted tens of thousands.

The government has imposed weeks-long 24-hour curfews in several Kurdish towns across the southeast in a crackdown on the PKK's urban youth wing, which over the past months has dug trenches with explosives and erected walls in several towns and neighborhoods to keep security forces out.

Security forces this week heightened operations in Cizre and Silopi, near the border with Iraq and Syria, as well as Diyarbakir's historic Sur district. The operations have forced tens of thousands of civilians to flee and many of those who stayed behind are stuck in their homes without food, water and electricity.

"Tanks and heavy weaponry, which are only used in conventional warfare, are being used by the Turkish armed forces, in areas where hundreds of thousands of civilians live," Kisanak said in a statement.

Citizens daring to violate or protest the curfew to get food and supplies have been fired at with tear gas, water canon and even bullets.

Ferhat Encu, a pro-Kurdish lawmaker in Sirnak, said on Twitter the bodies of those killed were still on the streets and in people's homes due to curfews. The HDP has accused the government of preventing the wounded from reaching hospitals.

In a report on Tuesday, the group Human Rights Watch (HRW) documented at least 15 civilian deaths during three curfews in September and November, noting this was just a "sample" and that the civilian death toll would likely rise in the coming days. HRW based the findings on interviews and local human rights groups, which have put the number of civilian deaths at at least 100.

"The Turkish government should rein in its security forces, immediately stop the abusive and disproportionate use of force, and investigate the deaths and injuries caused by its operations," said Emma Sinclair-Webb, senior Turkey researcher at HRW. "To ignore or cover up what's happening to the region's Kurdish population would only confirm the widely held belief in the southeast that, when it comes to police and military operations against Kurdish armed groups, there are no limits - there is no law."

Security forces have failed "to distinguish between people who were armed and those who weren’t, making no assessment of the threat an individual posed or the necessity of using lethal force," HRW added.

HRW also called on the PKK to stop planting explosives in trenches and erecting walls cutting off neighborhoods.

The Turkish government has vowed to root out every last "terrorist" following the breakdown of a peace process and two year ceasefire with the PKK in July.

Hundreds of security forces, PKK militants and civilians have since been killed as the prospect for a political solution look increasingly grim.

The charismatic leader of the pro-Kurdish Peoples' Democratic Party (HDP), Selahattin Demirtas, said the government is incapable of negotiating with its own people to resolve the issue of Kurdish rights and has instead resorted to bombing Kurdish towns.

Demirtas accused the government and military of targeting citizens who were presented as "terrorists."

"We stand by our people who resist the tanks and shelling," he said on Tuesday before heading to Moscow to meet Russian Foreign Minister Sergei Lavrov.

The Turkish government criticized the visit following the falling out between Ankara and Moscow over the downing of a Russian jet last month on the Syria border.

Meanwhile, a prosecutor has opened an investigation into Demirtas and four other Kurdish politicians for violating broad anti-terrorism laws and provoking Kurds to resist the security crackdown. Lawmakers cannot be prosecuted unless stripped of immunity by parliament.

The PKK is recognized as a terrorist organization by Turkey, the United States and Europe. Since 1984, at least 40,000 people have been killed and hundreds of thousands displaced in the conflict.

Millions of Kurds across the region and in Europe support or sympathize with the PKK.

Turkey has been concerned over the advances of the PKK's Syrian affiliate, the YPG, which has gained broad swaths of territory along the border in Syria backed by US air power against the "Islamic State."