Turkey has promised to stop deploying troops to northern Iraq after Baghdad threatened to appeal to the UN Security Council to force the soldiers out. Iraq's government says Turkish forces entered the country illegally. 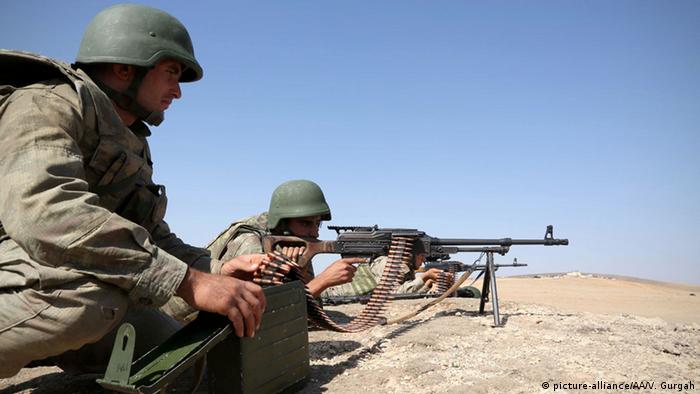 Turkish Prime Minister Ahmet Davutoglu assured Iraq on Sunday that no more troops would be sent across the border until Baghdad's "sensitivities" had been addressed.

Turkey deployed hundreds of soldiers to a camp in the Bashiqa region of northern Iraq on Thursday, saying they were part of a "routine rotation" to train Iraqi volunteer forces preparing an offensive to retake the city of Mosul from "Islamic State" (IS) militants.

The move angered Baghdad, which said the troops had entered the country without the approval or knowledge of the government.

"No further forces will be deployed to Bashiqa until concerns of the Iraqi government are overcome," Davutoglu said in a letter addressed to his Iraqi counterpart, Haider al-Abadi.

"Turkey is ready to deepen its cooperation with Iraq in coordination and consultation," he added, without specifying what would happen to the forces already stationed at Bashiqa. One day earlier, Davutoglu had said the camp was nothing new, and had been set up in coordination with Iraq's Defense Ministry nearly a year ago.

Prime Minister Abadi, meanwhile, has threatened to turn to the UN Security Council, saying "Iraq has the right to use all available options" if the troops are not withdrawn within 48 hours.

Iraqi forces have been preparing a counter-offensive to recapture Mosul, which was seized by IS in June 2014. The operation has been repeatedly postponed, mainly because Iraq's troops are thinly stretched and have been called away to fight battles in other parts of the country. Iraq has urged the international community to provide more weapons and training in the campaign against the militants, while at the same time struggling to assert its sovereignty.

NATO member Turkey is part of the US-led coalition carrying out airstrikes against IS in Syria and Iraq. The US said in a statement that while it was aware of Turkey's latest troop deployment near Mosul, the move was not part of the coalition's activities.

Turkey committed a 'hostile act' by deploying troops to northern Iraq, according to the Foreign Ministry in Baghdad. Turkey claims it just reinforced an existing training camp for local volunteers. (05.12.2015)

Baghdad says the entry of a battalion of Turkish troops is a violation of its sovereignty. Iraq's foreign ministry has described the activity as "an incursion" and demanded the immediate withdrawal of Turkish forces. (05.12.2015)