Turkey's President Recep Tayyip Erdogan has criticized an EU offer of financial help to ease the migrant crisis. The foreign minister said that an action plan agreed in Brussels was merely a draft and not final. 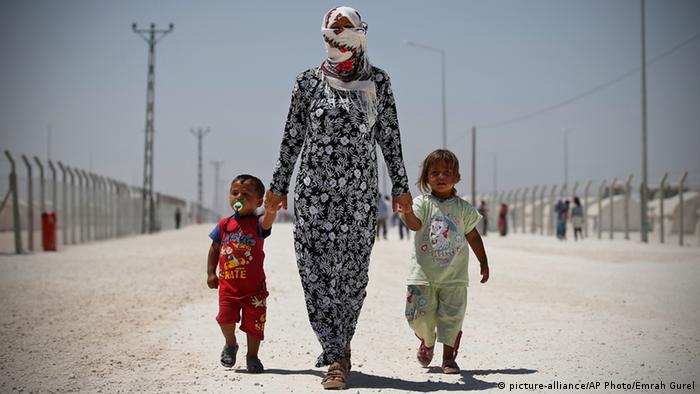 Turkish leaders accused Europeans of treating their country shabbily on Friday, warning that a new deal with the European Union to help stem the flow of migrants was not yet finalized. The EU and Turkey had struck what was described as an action plan aimed at stemming the massive influx of migrants into the bloc only yesterday.

But Turkey's President Recep Tayyip Erdogan said that he was unimpressed by the EU's recent offer to his country:

"They announce they'll take in 30,000 to 40,000 refugees and then they are nominated for the Nobel for that. We are hosting two and a half million refugees but nobody cares," Erdogan said.

Turkey's Foreign Minister Feridun Sinirlioglu meanwhile complained that the agreed EU financial package aimed at easing the effects of the refugee crisis in Europe was "unacceptable." Sinirlioglu said the EU action plan was "not final" and merely "a draft on which we are working." 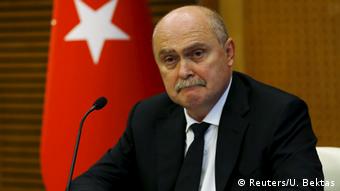 Turkey's Foreign Minister Feridun Sinirlioglu said that there was no room for bargaining after Turkey demanded an initial 3 billion euros ($3.4 billion) to deal with the two-million strong refugees in Turkey

The final offer had to be more than the "insignificant and meaningless amount that they proposed before," he said.

The foreign minister alleged that the funds earmarked for Turkey to deal with refugees were to be sourced out of a budget that was already intended as aid for Turkey in the first place.

"It is out of the question for us to accept an understanding of aiding Syrian refugees from funds allocated for Turkey," Sinirlioglu told reporters.

No room for bargaining

Sinirlioglu refused to provide any exact amount required by Ankara but said that if the EU delivered 3 billion euros ($3.4 billion) in the initial phase, it would be meaningful.

"We have spent $8 billion (on refugees) and our gross national product is around $800 billion. Theirs is $18 trillion. Three billion euro versus $18 trillion is comical but it is much better than the $500 million that they had delivered," Sinirlioglu stated.

The foreign minister further rejected any "bargaining" with the EU in the future, saying: "The aid to be delivered will not be for Turkey but to support Syrians in desperation."

Under the tentative agreement, Turkey had vowed to tackle people smugglers, cooperate with EU border authorities and put a brake on refugees fleeing the Syrian conflict from crossing by sea to Europe. In exchange, European leaders agreed to speed up easing visa restrictions on Turkish citizens traveling to Europe and give Ankara more funds to tackle the problem. 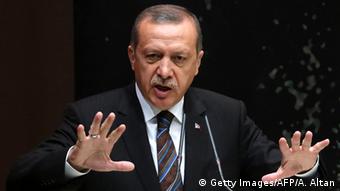 Sinirlioglu declared that Turkey would keep on assisting migrants and combating people traffickers regardless of current talks but said solutions had to be produced to eradicate the reasons for such illegal migration. One of these, he said, was creating conditions that would keep refugees inside their own country. Sinirlioglu stressed that creating a 'safe zone' inside Syria would address this issue.

While the EU action plan also focuses on measures to combat people trafficking, notably by reinforcing the Turkish coastguard patrol and surveillance capabilities, there has been little to no progress in establishing any 'safe zone' within Syria - particularly since the onset of Russian air strikes in the war-torn country.

Turkey was the main departure point for the more than 600,000 migrants who have entered Europe this year - most of whom made their journeys via the short but dangerous sea crossing to the Greek islands, with some also coming by land.

An upcoming visit to Istanbul on Sunday by German Chancellor Angela Merkel, who called Turkey "indispensable" to solving the crisis which has seen Germany take in the lion's share in Europe of refugees, could be regarded as another token of respect. Merkel also confirmed that further funds from the EU could be in the region of 3 billion euros – the amount pursued by Foreign Minister Sinirlioglu. 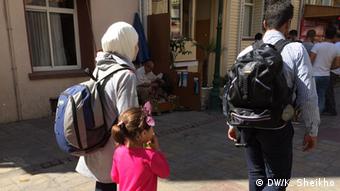 The majority of Syrian migrants in Turkey have left refugee camps and have moved to cities, from where they try to find ways to make their way into the EU

However, Sinirlioglu did not seem impressed by the sudden diplomatic traffic: "The EU all of a sudden has rediscovered Turkey," he commented. "Turkey is not a country to just be remembered at times of crisis and not a county to cooperate with only for tactical reasons."

Turkey's President Recep Tayyip Erdogan went even further and said: "They keep saying 'We can't do without Turkey.' Then why don't you let Turkey in the EU?" he said.

Turkey's EU accession talks have been stalled amid concerns over its human rights record, the divided island of Cyprus, and suspicions it has its own agenda in Syria, among other issues.