Opposition party leader Kemal Kilicdaroglu was attacked by an angry mob in public and nearly killed — the latest in a spate of such violence. What does the incident say about the political culture in the country? 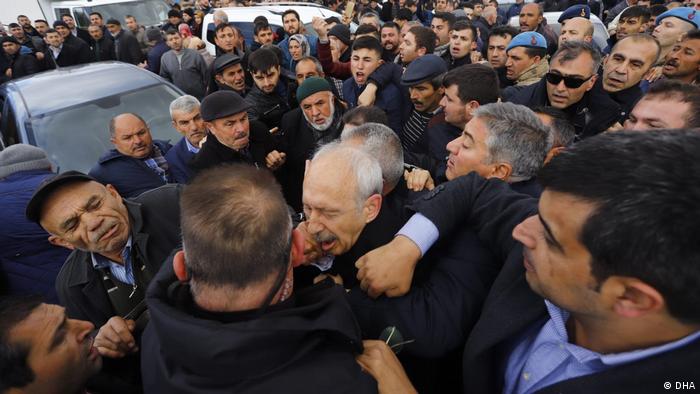 The leader of the Republican People's Party (CHP), Kemal Kilicdaroglu, had most likely prepared himself for a more contemplative day on April 21, when he attended the funeral of a soldier killed during a battle with Kurdish militias.

But the atmosphere among those in attendance at the memorial being held in Cubuk, about 40 kilometers (24.8 miles) north of Ankara, turned out to be tense and when Kilicdaroglu arrived, the situation escalated quickly. An angry mob surrounded the 70-year-old, hurling punches at him from all directions; the opposition leader took a few blows to the face.

Grimacing in pain, he struggled to stay on his feet amidst the violent uproar. Kilicdaroglu's bodyguards surrounded him so as to shield him from the many attackers. Finally, they managed to escape into a house. But it didn't stop there: Kilicdaroglu had to wait inside while the house was besieged, with some of the men shouting "burn the house down."

The attack sparked outrage on social media. On Twitter, hundreds of thousands of users expressed solidarity with the opposition leader by posting with the hashtag #KilicdarogluYalnizDegldir ("Kilicdaroglu is not alone").

A tweet from Eren Aysan, the daughter of famous Turkish poet Behcet Aysan, went viral: "My father was killed in the massacre in Sivas. In the last 26 years, I see that nothing has changed. Again, the call is "set the house on fire." 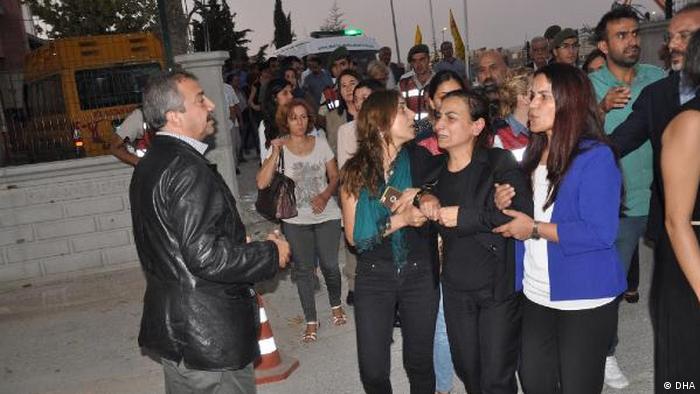 Kilicdaroglu: Not an isolated case

The tweet hit a nerve. The words reminded many in Turkey that the mob attack at the funeral was not an isolated incident. Aysan's post bore particular weight because her poet father was killed in an instance of mob violence in the central city of Sivas in 1993.

During an Alevi cultural festival, a mob of religious fanatics set fire to a hotel where most of the guests were Alevi. Thirty-seven people lost their lives in the arson attack.

Another case of mob rule that evokes painful memories among the older Turkish generation occurred in 1977. In the Turkish province of Kahramanmaras, right-wing extremists close to the ultranationalist Nationalist Movement Party (MHP) massacred more than 100 Alevis, some of the killings took place in the open on the street. Many similar cases of mob attacks— especially against the Alevi minority —  have taken place in Turkey since the 1960s.

In 2017, an angry crowd in Ankara blocked the funeral of the mother of Aysel Tugluk, deputy chair of the pro-Kurdish Peoples' Democratic Party (HDP) party. As a result, her mother Hatun Tugluk's body had to be removed from the grave and had to be buried in another city. This case and that of Kiricdaroglu have now brought the issue to the fore.

Critics say President Recep Tayyip Erdogan of the Justice and Development Party (AKP) needs to act. But Turkish Defense Minister Hulusi Akar, also present at the soldier's funeral, even expressed sympathy for the mob during the violent outburst: "Dear friends, you have made your point clear, please go home now," he said.

Sociologist Besim Can Zirh from the Technical University of Ankara views mob rule as a "tried and tested tool" of the Turkish government in times of crisis. The anti-Alevi sentiment before the massacres in Kahramanmaras and Sivas was motivated by the fact that the minority was making progress establishing themselves socially and politically.

Zirh believes that in secular groups in Turkey similar situations are being experienced. The lynching policy has three purposes: "It intimidates aspiring social groups, it serves as an outlet for political hatred of the population, and it sends a warning: do not dare deviate from the life path we have planned for you."

Sezgi Durgun from Marmara University in Istanbul agrees that mob rule occurs mainly in volatile times: "Such incidents show how people have internalized violence," adding that "the most dangerous aspect of mob rule is that a single incident can lead to collective morality and spread an assumption that the rule of law no longer applies."

According to Durgun, the lynching attempt illustrates that populism and heated debate now culminate in violent polarization. So it's hardly surprising that citizens, fueled by nationalistic sentiment, take the law into their own hands, he believes.

Read more: The beginning of the end for Erdogan era

'We kiss the fists of those who punch'

Academic Nagehan Tokdog agrees — she also sees the climate of uncertainty as a decisive factor. She believes that political instability and the economic crisis are responsible for the increase of aggression against various groups.

But Tokdog also blames the Turkish mentality for the fact that there are more and more incidents, saying that Turkey is a country that only ever reluctantly concedes mistakes and crimes in society.

"We cannot admit that such a thing is a disgrace. We just do not denounce acts like this. On the contrary, we kiss the fists of those who punch." Tokdog is referring to bizarre images that did the rounds on social media in the wake of the funeral after the incident: A person who managed to punch Kilicdaroglu in the face had his hand tenderly kissed after hitting the politician.

While academics may use the "Turkish mentality" or a phase of political insecurity to explain the attack on the opposition leader, many others blame the AKP, even if the ruling party immediately distanced itself from the incident by saying "the AKP is against any form of violence."

However, in the local elections over a month ago, he repeatedly accused Kilicdaroglu of supporting the banned Kurdistan Workers' Party, which is considered a terrorist organization.

This polarizing rhetoric showed its true face in the Kilicdaroglu incident — investigators revealed that among the violent mob, AKP supporters were also present.