The UN cultural agency had voiced "grave concern" for the World Heritage Site in Istanbul after it was changed from a museum to a mosque. Turkey said there was "no negative impact" to the building. 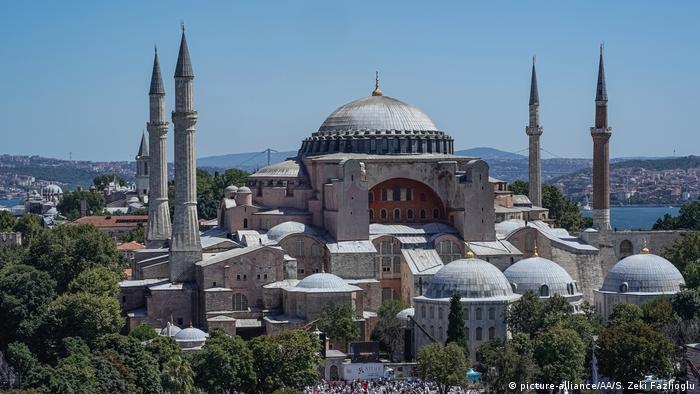 Turkeyꞌs foreign ministry on Saturday rejected UNESCO criticism over Ankara reopening the Hagia Sophia, once a Christian temple, as place of Muslim worship a year ago.

The United Nations cultural agency expressed "grave concern" on Friday over the fate of Istanbul's most famous temple. But Turkey dismissed the comments as "biased and political" and said Ankara was "astonished" by the move.

What did Turkey say?

The Turkish foreign ministry said the changes to the Hagia Sophia had "no negative impact" on UNESCO standards.

"Turkey disassociates itself from the relevant articles of the decision on the ꞌHistoric Areas of Istanbulꞌ based on biased, unfair wording prepared with political intentions," said its foreign ministry.

The Turkish government said it is "fully aware of its rights, prerogatives and responsibilities towards its properties on UNESCO World Heritage List."

In an apparent signal to the public, Turkish President Recep Tayyip Erdogan tweeted a video of Hagia Sophia on Saturday, calling it "a symbol of the re-rising of the sun of our civilization."

He expressed his hopes that the sounds of Muslim prayers and worship would "echo the domes of this mighty shrine until the end of the world."

What did UNESCO want?

The World Heritage Committee of UNESCO meeting in China for its annual session asked Turkey to provide "an updated report on the state of conservation" of the Hagia Sophia.

The building was built in 537 and was the largest cathedral in the Byzantine capital of Constantinople. The Ottoman Empire captured what is now called Istanbul in 1453 and converted the Hagia Sophia into a mosque.

The secular Turkish Republic established it as a museum in 1935 but President Recep Tayyip Erdogan reopened it as a mosque in July 2020.

The conversion of the Hagia Sophia and an ancient Othodox church called the Holy Saviour in Chora to mosques come as Erdogan tries to muster nationalist supporters in the midst of an economic crisis created by the pandemic.

The UNESCO committee said it "deeply regrets the lack of dialogue and information" on the changes and asked Turkey to engage in better international communication about its plans for these sites.

The UN Security Council said on Friday plans to reopen Varosha could "raise tensions" and "harm prospects for a settlement" in Cyprus.