A Dutch journalist who had been reporting from Turkey's mainly Kurdish southeast has been deported from the country. This came less than a week after Frederike Geerdink had been arrested. 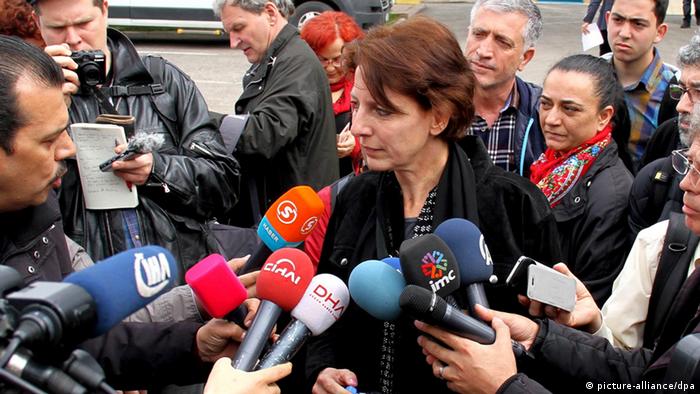 Geerdink, who mainly reports for Dutch radio stations and newspapers, confirmed on Thursday that she had returned to the Netherlands after having been deported by the Turkish state.

"I am back in the Netherlands now and I so don't want to be here," Geerdink said in an email to her colleagues.

Geerdink had been arrested on Sunday in the southeastern Turkish town of Yusekova, along with a group of protesters who said they were acting as "human shields" in an effort to stop violence between Turkish security forces and rebels from the Kurdistan Workers' Party (PKK).

According to the state-run Anadolu news agency, Geerdink was arrested inside a security zone cordoned off by the Turkish military.

She is the third foreign journalist reporting from Kurdish regions of Turkey to be deported this month, after two British journalists working for Vice News were expelled last week. They had been in jail on terror-related charges, while their Turkey-based assistant remains behind bars pending an investigation.

In a separate incident, Geerdink was put on trial earlier this year on charges of spreading terrorist propaganda, but the case was thrown out of court.

These cases have raised fresh concerns about press freedom in Turkey, which the non-governmental organization Reporters Without Borders ranked at 149 of 180 countries in its annual World Press Freedom Index.

A prosecutor has asked for dismissal of charges against a Dutch reporter. The trial marks Turkey's first prosecution of a foreign journalist under anti-terror laws in decades. Jacob Resneck reports from Diyarbakir. (08.04.2015)