The former senior navy officers were detained for a statement they made about maritime Black Sea access. Ankara said the comments were evocative of previous military coup attempts. 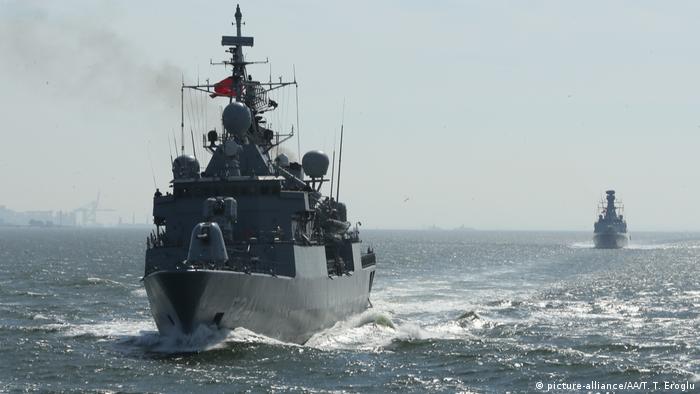 Turkey on Monday arrested 10 retired admirals who signed a statement asserting the importance of the Montreux Convention, designed to prevent the militarization of the Black Sea.

The statement prompted retaliation from Ankara, which saw it as a direct challenge from the military to the civilian government evocative of the 2016 coup attempt.

What was the admirals' concern?

The statement, signed by 104 former high-ranking navy officials, appeared to question the government's commitment to the Montreux Convention.

The convention was signed in 1936 and regulates the use of both the Bosphorus and the Dardanelles straits by cargo ships. It also limits the access of military vessels.

The admirals say the convention made it possible for Turkey to maintain its neutrality during World War II and avoid being dragged into a potentially devastating conflict.

Turkey is planning to build a huge "Canal Istanbul" project connecting the Black Sea north of Istanbul to the south-lying Marmara Sea. An official has said that the new stretch of water will not be covered by the convention.

The retired military officials highlighted this, and President Recep Tayyip Erdogan's authority to withdraw from international pacts such as the Istanbul Convention on violence against women, as causes for concern.

"The fact that withdrawing from the Montreux Convention was opened to debate as part of talks on Canal Istanbul and the authority to exit from international treaties was met with concern,'' they said.

"There is a need to avoid any statements and actions that could cause the Montreux Convention, an important treaty in terms of Turkey's survival, to be brought up for discussion."

What was Ankara's response?

The state-run Anadolu news agency reported that the 10 retired admirals were detained as part of an investigation launched by Ankara's chief prosecutor. Four others were summoned to report to authorities within the next few days.

The 14 individuals are suspected of having organized the declaration.

The statement prompted strong condemnation by officials from the ruling party and government officials. They said it compared with statements that had accompanied past military takeovers in Turkey.

Anadolu reported that the suspects were being investigated on the possible charge of reaching "an agreement with the aim of committing a crime against the security of the state and the constitutional order."

The detained admirals included some of the country's most famous naval commanders. Among them is Cem Gurdeniz, sometimes described as the father of Turkey's "Blue Homeland" maritime doctrine. The doctrine argues that Turkey has the rights to substantially expanded maritime borders including the water surrounding some Greek islands.

Presidential spokesman Ibrahim Kalin said the statement bore typical characteristics of a military plot to overthrow the government. He said it evoked memories of a 2016 failed coup.

"A group of retired soldiers is putting themselves into a laughable and miserable position with their statement that echoes military coup times," he said.

A history of military coups

Turkey's secularist armed forces were once the dominant force in the country, but Erdogan and his Islamist-based Justice and Development Party have eroded their influence since attaining power in 2002.

The military staged three coups from 1960 to 1980, and it pressured a previous Islamist-led government out of power in 1997.

The 2016 coup to overthrow Erdogan was blamed on followers of the US-based Islamic preacher Fethullah Gulen.

Tens of thousands of people have been arrested and jailed pending trial since 2016 on suspicion of belonging to Gulen's movement. In addition, more than 100,000 civil servants, among them teachers and police officers, have been sacked or suspended from their jobs for suspected links to the cleric.

Wednesday is the International Transgender Day of Visibility. Turkey has shown itself to be regressive with regard not only to women's rights, but also those of the LGBT+ community.