Turkey advances into Syria's Idlib in major offensive against jihadists

Turkish-backed rebels are deploying to Idlib province to fight an alliance led by the former Nusra Front, Turkish President Erdogan has said. In turn, the militia said "lions of jihad and martyrdom" were ready to pounce. 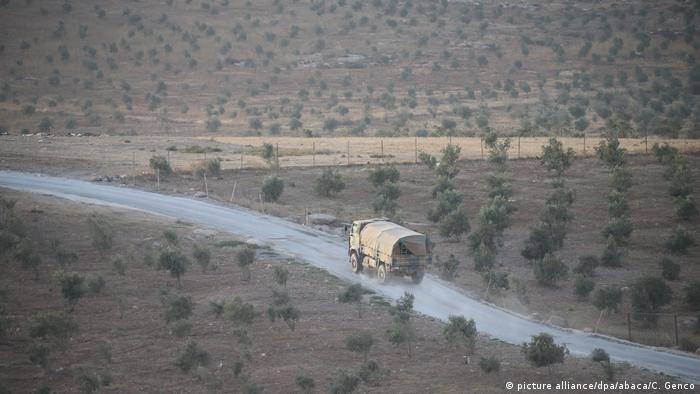 Fighting broke out on the border of Turkey and the Syrian province of Idlib on Sunday ahead of a Turkish advance into the region.

Turkish President Recep Tayyip Erdogan on Saturday announced a major operation against the Hayat Tahrir al-Sham (HTS) jihadist coalition in Idlib, the only province in Syria which is still completely under rebel control.

"There's a serious operation in Syria's Idlib today and it will continue," Erdogan said in a speech to the members of his AK Party on Saturday, adding that Ankara would not allow a "terror corridor" on the border with the war-torn country.

On Sunday morning, HTS fighters opened fire on Turkish forces who were removing a section of the border wall with bulldozers, eyewitnesses and the Syrian Observatory for Human Rights monitor said. Turkish forces responded with artillery fire, narrowly avoiding a refugee camp.

Turkey has been amassing troops on the border to support the effort, with several of its top generals inspecting the preparations, the military said.

Turkish military vehicles were seen on Sunday advancing into the region, reportedly accompanied by HTS fighters, with whom they had earlier been fighting, according to Reuters news agency.

In the lead up to the operation, Turkey agreed to set up a so-called de-escalation zone in Idlib in a deal with Iran and Russia. The zone would be monitored by Turkish soldiers.

In order to achieve that, Turkish soldiers and Turkey-based rebels must first defeat the Tahrir al-Sham alliance, which is the second strongest jihadist militia in Syria behind the "Islamic State." The alliance is spearheaded by the organization previously known as the Nusra Front.

While the Nusra front was formed as an off-shoot of al Qaeda, the militia changed its name and denounced its allianceto the terror network last year, but the separation has been dismissed by many experts as largely superficial.

Commenting on the upcoming offensive, FSA commander Fares al-Bayoush told the Associated Press that the aim was "to finish the Nusra Front."

Responding to reports of the upcoming attack, the Front slammed the FSA and its allies as traitors.

In a statement, the groups said that attacking Idlib would "not be a picnic" and added that "the lions of jihad and martyrdom are waiting to pounce."

President Erdogan refused to provide details on the extent of Turkish military deployment in Syria.

"When you enter a boxing match, you don't count how many punches you will throw," Erdogan said.