Tunisia′s interim government torn by series of resignations | World| Breaking news and perspectives from around the globe | DW | 18.01.2011

Tunisia's interim government has been rocked by a series of resignations just hours after it was formed, in an apparent bid to meet the demands of protesters and opposition leaders to reject the ruling party. 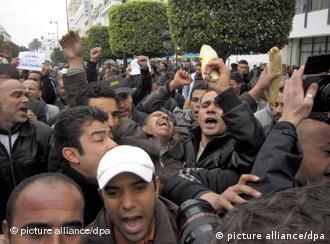 Protests continued against the new government in Tunisia

Tunisia's fledgling interim government has been rocked by a series of resignations, after protesters took to the streets once more in rejection of the new government on Tuesday, demanding the ruling party leave power.

Tunisia's new president and prime minister have resigned from the former ruling party, according to state television.

The move came as opposition politicians and union leaders threatened to bring down the interim government, which had been dominated by figures from former President Zine El Abidine Ben Ali's cabinet. Ben Ali fled the country last week after being brought down by popular protests. 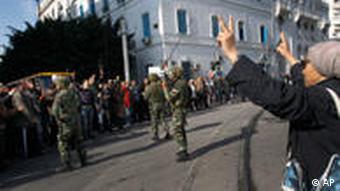 "In a bid to split the state from the party, President Fouad Mebazza and Prime Minister Mohamed Ghannouchi resigned their duties in the Democratic Constitutional Rally," Tunisia television said.

Meanwhile three opposition ministers resigned from the government earlier on Tuesday in protest at the continued presence of former members of the old government.

"This is in response to the demands of people on the streets," Abid al-Briki of the Tunisian Labor Union said.

The ministers included Houssine Dimassi, who had been nominated for the training and employment portfolio, along with two other junior minsters. Meanwhile Health Minister Mustapha Ben Jaafar, another opposition figure, was also absent from the swearing-in ceremony.

Protesters rejected the make-up of the interim government, making their feelings clear on the streets of Tunis.

Tunisian police used teargas to break up a protest against the unity government.

Tunisian foreign minister, Kamel Morjane, did his best to quell the fears of the protesters. 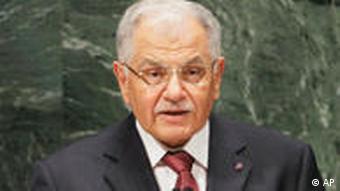 Morjane is a holdover from the old government

"We would like to confirm this is a transitional government and its goal is clear and its term is limited by law and by agreement between all parties," he said.

"Its goal is to set up free presidential elections with integrity... which will have foreign monitors or observers."

Morjane is one of the ministers retained from President Ben Ali's government.

Ghannouchi insisted that those who stayed in power, including himself, have "clean hands."

He has promised to release political prisoners from the Ben Ali era as well as to bring to justice those behind the killings during the last weeks of unrest. Official estimates put the death toll at 78.

Ben Ali, who had ruled Tunisia for 23 years, was toppled after weeks of protests against poverty and unemployment levels in the country.

The French foreign minister has been criticized for offering to help Tunisian police during the country's uprising. But a Middle East expert tells Deutsche Welle that France's reaction shows wider EU hypocrisy. (18.01.2011)