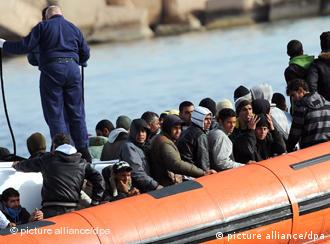 Italian officials urged their EU counterparts to help cope with the massive influx of people fleeing the Arab unrest. But somewhat of a split has emerged between northern and southern EU member states. Germany and France have been especially opposed to the influx of migrants entering Europe.

"We cannot accept that many economic migrants will come into Europe through Italy," said German Interior Minister Hans-Peter Friedrich before the meeting. "We expect Italy to adhere to the legal standards and fulfill its duties."

An unnamed diplomat told the German press agency that Austria, which shares a border with Italy, was also among the most vocal critics of the Italian plan, arguing that the move could threaten the viability of Europe’s borderless Schengen Area.

EU Home Affairs Commissioner Cecilia Malmström sought to dismiss those suggestions, though, saying the Schengen concept was an integral part of Europe.

"It is a test of EU solidarity and what it means in concrete terms and ultimately in words," she said in Luxembourg. "Schengen is a beautiful invention of the European Union and we shall defend it." 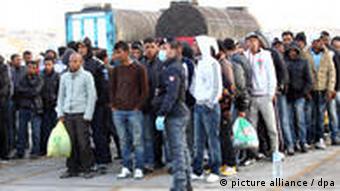 Spain, meanwhile, argued ahead of the gathering for a "coherent European migration policy," with the country’s interior minister, Alfredo Perez Rubalcaba, commenting that the matter was a "European problem."

More than 25,000 migrants, mostly Tunisian nationals, have arrived at the southern Italian island of Lampedusa since January. France is expected to take in the majority after Italian Prime Minister Silvio Berlusconi said around 80 percent of the migrants from Tunisia wanted to join friends and relatives in their former colonial ruler.

France has responded by agreeing to launch patrols off the Tunisian coast to prevent further migration to Europe, and Interior Minister Friedrich said Germany also planed to increase border controls to stop the wave of migrants.

"It cannot be in the spirit of Europe that we are now forced to introduce new controls," said Friedrich, adding that no migrant activity was yet underway.

Italy's position is in direct opposition to Europe's policy on the issue, and Rome has urged other EU member states to share the burden of welcoming the migrants.

"Today we will see if Europe is made of unity and solidarity or if it's just a geographical expression," Italian Interior Minister Roberto Maroni said Monday.

German interior minister: 'Italy must live up to its responsibilities'

Italy must deal on its own with the problem of a surge in North African refugees, says German Interior Minister Hans-Peter Friedrich. A mere 23,000 refugees can hardly be a problem, he told German public broadcaster ARD. (11.04.2011)

Italian Prime Minister Silvio Berlusconi has held talks with the Tunisian government on repatriating thousands of migrants who have fled to Italy. Meanwhile, migrant vessels have continued to arrive in Italy. (04.04.2011)

Italy and France agree on patrols to stop Tunisian migrants

Italy and France have agreed to launch patrols off the Tunisian coast to stop migrants heading to Europe. The meeting followed a dispute between Paris and Rome over plans to let immigrants travel within Europe. (08.04.2011)