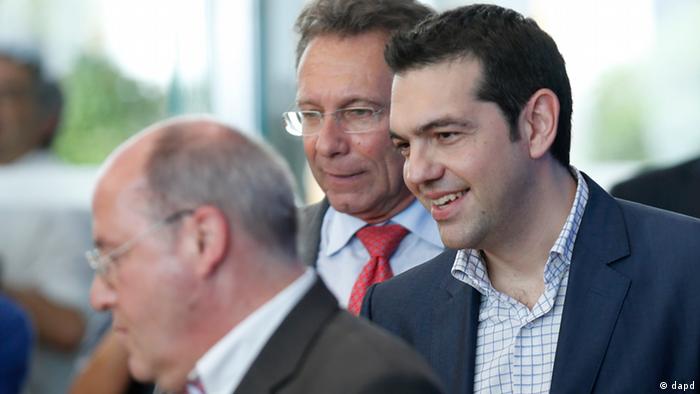 "It will be done at the latest by Monday," Sakellaridis said, adding that Tsipras had only presented Merkel with the "outlines of the reform plans."

Sakellaridis said the package of reforms Athens would propose would not contain recessionary measures but structural changes. 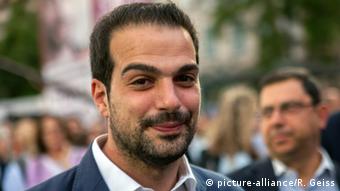 Government spokesman Sakellaridis lauded progress made with Merkel on Monday

In Berlin, Tsipras met the leader of the German Left party, Gregor Gysi (pictured at top of story), on Tuesday, at the start of his second day in the German capital.

The chancellery in Berlin said that Merkel's five hours of talks with the Greek premier were conducted in a "good and constructive atmosphere."

The Italian newspaper La Repubblica quoted European Parliament President Martin Schulz as saying that he expected Athens to reach an agreement with its eurozone partners within a week to grant Athens much-needed cash.

"I think by the end of this week a new deal will be reached that should be sufficient to release the most urgent financing," Schulz said, adding that Greece would have "not more than three months" to present a credible plan containing more details.

On Tuesday, Tsipras was set to meet Social Democrats (SPD), who are partners in Merkel's federal coalition government. He met Foreign Minister Frank-Walter Steinmeier in a hotel near Potsdamer Platz and was later due to visit Vice Chancellor Sigmar Gabriel.

Tsipras was also scheduled to meet leaders of Germany's opposition Greens and the Left Party on Tuesday.

Greeks elected Tsipras' leftist Syriza party in January on a pledge to end painful austerity policies. Eurozone creditors have been pressing Tsipras' cabinet to reach budgetary targets similar to those agreed by past Greek administrations

Greece's creditors agreed in February to extend its 240-billion euro ($260-billion) bailout by four months but only in exchange for further reforms. Last week, Athens said it needed funds to avoid bankruptcy and a possible exit from the euro.

Spring lifts spirits as Merkel and Tsipras meet in Berlin

Chancellor Angela Merkel is perhaps the major player at the table in the Greek debt game. Now the cards have to be remixed. Merkel and her Greek counterpart Tsipras seem best suited to this task, says Marcel Fürstenau. (24.03.2015)