Tokyo aims to team up with the US, India and Australia to promote free trade and defense and security cooperation - but also to contain Beijing's aggressively expansionist policies. Julian Ryall reports from Tokyo. 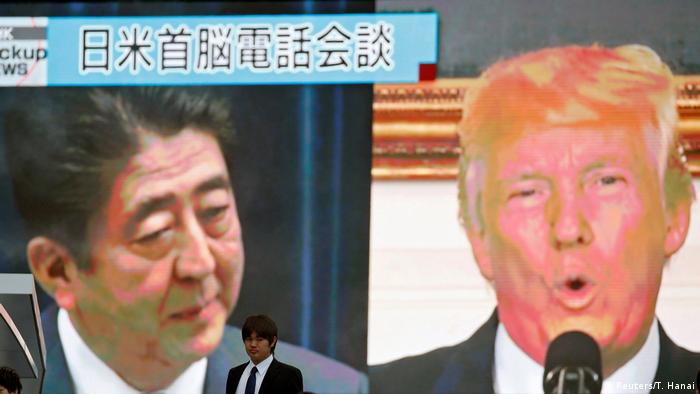 At the summit of the leaders of the Group of 20 nations in Hamburg in July, Japanese Prime Minister Shinzo Abe indicated that Tokyo would be willing to take part in Beijing's ambitious "One Belt, One Road" (OBOR) economic development plan. The Japanese leader's decision was apparently prompted by concerns that domestic firms would miss out on lucrative construction projects as the modern-day "Silk Road" project spread into Southeast Asia, the Central Asian republics, the Middle East and beyond.

Just three months later - and after conservatives at home raised their eyebrows at such close cooperation with a government that they perceive as taking every opportunity to belittle Japan - Foreign Minister Taro Kono has announced that he intends to use the upcoming visit of US President Donald Trump to propose what might very easily be perceived as an alternative to China's OBOR initiative.

In an interview with Japan's Nikkei economic daily on Wednesday, Kono said Tokyo wanted to set up top-level dialogue between Japan, the US, India and Australia in order for the four powers to promote free trade and cooperation in defense and security throughout the South China Sea, across the Indian Ocean and all the way to Africa.

Kono added that he had offered collaborative roles to other nations - he mentioned both France and the UK as potential future contributors - and the plan is clearly designed to act as a counterweight to the massive economic and military might that Beijing continues to build.

"We are in an era where Japan has to exert itself diplomatically by drawing a big strategic picture," Kono said, adding that "Free and open seas will benefit all countries, including China and its 'Belt and Road' initiative."

Despite the claim that the Japanese-led initiative will equally assist China's ambitions, there is little disguising the fact that Tokyo is trying hard to build unity among nations both big and small to resist Beijing's advances. There has been concern in Japan for some years about the way in which China is exercising its economic and military muscle, but that was put into very clear focus in 2015, when China ignored international protests and occupied a series of uninhabited atolls and coral reefs in the South China Sea.

The islets have been variously claimed by the Philippines, Vietnam, Malaysia and Brunei, and the international community condemned Beijing's decision to unilaterally occupy, develop and militarize the territories. Today, it appears unlikely that Chinese troops can be removed from the islands, and Japan fears that Beijing will use similarly high-handed economic and military tactics to achieve its aims elsewhere in the Asia-Pacific region.

"This proposal, as I see it, is very positive for Japan, but also for the US, India and Australia," said Yoichi Shimada, a professor of international relations at Fukui Prefectural University. "And later, when it is more fully formed, it can be a good thing for all the countries of Southeast Asia as well.

"It is important that we have an alternative to the ideas of China because countries might join their plan and Beijing could very easily change those plans to better favor themselves," he told DW.

"China is so big and powerful that not many other nations can stand up to them. I believe there is a risk involved for any country that places all its eggs in one basket and works solely with China," he said, adding that he was confident that Beijing's actions in the South China Sea would not have won Beijing many new fans.

Shimada believes an alliance that brings together Japan, India, Australia and the US will have a better track record and reputation in the international sphere.

Garren Mulloy, a defense expert and associate professor of international relations at Japan's Daito Bunka University, is confident that Australia and India will be keen to be involved in the initiative as they too look to counter China's aggressive expansionist policies in areas that are an immediate threat to their own security.

"Australia and Japan, in particular, feel let down by Trump after he pulled out of the Trans-Pacific Partnership free trade agreement and they have been seeking a 'third forum' through which they can join together and regain the initiative," he told DW.

China is Australia's biggest trading partner and there has been heavy investment in Australia by Chinese companies in recent years. One of the most contentious deals was the leasing of the harbor in Darwin, northern Australia, to a Chinese company, with many critics of the deal saying it makes no sense to give away the nation's strategic infrastructure assets to a rival. The Pentagon was also unhappy with the deal as Darwin serves as a key naval facility for the US navy and its Marine Corps.

On the other hand, Mulloy said, the "Belt and Road" initiative would appear to have limited value to Canberra, so an alliance with Japan, India and the US would be a more logical step.

Similarly, India has been watching China's growing investment in Sri Lanka, where Beijing's funds have paid for a major new port facility that has already had Chinese warships visit.

And while Mulloy believes an alternative to China's plans could be beneficial to the region, he says the nations that opt to participate will not be able to afford to invest as much as China has already sunk into its vision for a 21st century Silk Road.

Chinese leader Xi Jinping says US President Donald Trump should exercise restraint in the North Korea crisis. Trump said Friday the US military was "locked and loaded," as Pyongyang accused him of war mongering. (12.08.2017)

Japanese Prime Minister Shinzo Abe's ruling coalition is set for a two-thirds majority in Sunday's election, according to exit polls. Abe says his imminent task is to deal with the crisis over North Korea. (23.10.2017)