The plan is expected to face stiff opposition from US Republicans who supported Donald Trump's border policies. 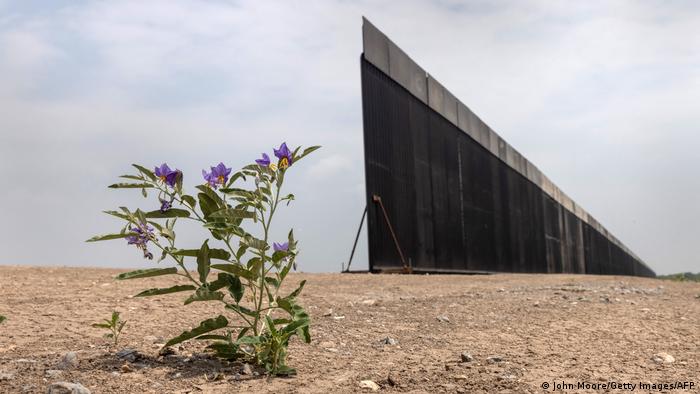 An unfinished portion of the US-Mexico border wall stands near La Joya, Texas

US President Joe Biden's administration on Friday announced a plan to return more than $2 billion (€1.7 billion) allotted by former President Donald Trump for a controversial wall on the US-Mexico border.

Trump had redirected billions of dollars from the Defense Department to fund the wall, which he claimed to be necessary to fight illegal immigration.

What did the Biden administration say about the plan?

"Building a massive wall that spans the entire southern border and costs American taxpayers billions of dollars is not a serious policy solution or responsible use of Federal funds," the Office of Management and Budget (OMB) said in a release outlining the initiative.

The White House said the money would be redirected to 66 military projects in 11 US states, three US territories and 16 countries. Among those projects is $79 million for an elementary school aimed at children of US military personnel stationed in Germany and $50 million for a Marine Corps machine gun range in Guam.

The plan also intends to use $1.9 million appropriated by Congress for the wall on fixing environmental damage caused by its construction. The Biden administration has urged lawmakers to not provide any additional funding for the border project.

The plan will likely face tough opposition in the US Congress, as many Republicans there still back the wall.

What about Texas building on its own?

Texas Governor Greg Abbott, a Republican, said Thursday he would unveil plans to construct a new barrier between Texas and Mexico next week.

"Long term, only Congress and the president can fix our broken border," Abbott said in the border city of Del Rio. "But in the meantime, Texas is going to do everything possible, including beginning to make arrests, to keep our community safe, to keep the cartels and smugglers out and to keep your community safe."

Abbott has not yet provided any details about the plan for the new project. It's unclear whether Abbott even has the authority to construct the wall, as much of the US border with Mexico is owned by either the federal government or private entities.

US VP Kamala Harris' message in Guatemala: 'Do not come'

How did Trump redirect military funds for the wall?

The border between the US and Mexico spans some 3,145 kilometers in its entirety. During his time in the White House, Trump managed to secure $15 billion for the wall, with $10 billion of that figure redirected from the Pentagon. Trump visited Texas in January before he left office to tout the 400 miles (around 644 kilometers) of border wall constructed during his administration.

Trump originally tried to negotiate with the Democratic-controlled House of Representatives in 2019 to procure congressional funding for the project. After these negotiations failed, the Trump administration declared the immigration on the southern border a national emergency, which in turn allowed the Pentagon funds to be used on the wall.

One of Biden's first executive actions as president was putting a "pause" on Trump's border wall construction and directing a review of all resources appropriated or redirected towards the project.

Biden's 2022 fiscal budget called for over $1 billion in spending on border infrastructure, but asked for no new funds for the border wall.

The Biden administration has been criticized by Republicans for its approach to immigration on the southern border. Vice President Kamala Harris this week visited Guatemala and Mexico in her first trip abroad to address the root causes of the immigration crisis.