Trump would be 'honored' to meet North Korea's leader

The US military has said its anti-missile system is now ready to defend against North Korean missiles. Meanwhile, President Trump has opened the door for a meeting with leader Kim Jong Un, saying it would be an "honor." 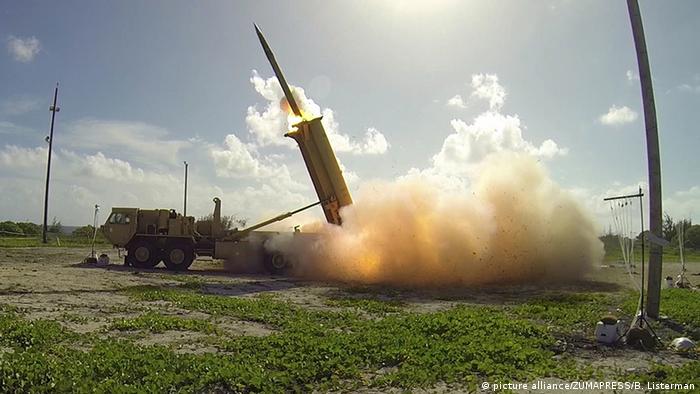 US President Donald Trump said on Monday that he would be honored to meet North Korean leader Kim Jong Un "under the right circumstances."

"If it would be appropriate for me to meet with him, I would absolutely, I would be honored to do it," Trump told the New York-based Bloomberg News agency. But the White House later said that the conditions "are not there right now," without providing further details.

Both North Korea and Washington have been trading off shows of force over the past few weeks. There are signs that North Korea might be preparing either its sixth nuclear test or a long-range missile launch, and the White House has refused to rule out military action in response.

Pyongyang warned on Monday that it would conduct a nuclear test at any time determined by its leadership, in the latest comments to fuel already heightened tensions in the region.

A spokesman for the North's foreign ministry said the government was "fully ready to respond to any option taken by the US," in a statement carried by the state-run KCNA news agency.

North Korea's "measures for bolstering the nuclear force to the maximum will be taken in a consecutive and successive way at any moment and any place decided by its supreme leadership," the spokesman said, apparently referring to a new nuclear test.

Last week, China warned that the situation on the Korean peninsula could escalate or slip out of control. South Korea has also regularly warned that the North can carry out a test whenever it chooses to do so.

North Korea raises the tone of its threats every spring when the United States and South Korea carry out joint military exercises which Pyongyang views as rehearsals for an invasion.

This year, however, fears of conflict have been fueled by a back-and-forth of threats from the Trump administration and Pyongyang.

The US military said Monday that a contentious anti-missile system dubbed the Terminal High Altitude Defense (THAAD) is now operational.

The deployment of the US missile system in South Korea has prompted concerns from Pyongyang as well as its regional ally, China. On Tuesday, China urged the immediate suspension of the missile shield.

"China's position is clear-cut and firm. We oppose the deployment of the THAAD system in (South Korea) and urge relevant sides to immediately stop the deployment. We will firmly take necessary measures to uphold our interests," foreign ministry spokesman Geng Shuang told reporters.

Previously, South Korea's Defense Ministry announced that two US B-1B bombers had participated in a joint drill over the Korean Peninsula.

Japan dispatched a helicopter carrier, Izumo, from a port south of Tokyo on Monday, which was to join a US supply vessel off Chiba prefecture, according to media reports.

It is the first operation of its kind since Japan passed controversial legislation allowing the military to have a greater role overseas.

Japanese officials said the US ship is expected to refuel other American warships in the region, including the USS Carl Vinson - a nuclear-powered aircraft carrier sent by the US as a show of force.

US President Donald Trump has reached out to allies in Asia, as tensions over North Korea continue to increase. It remains unclear, however, whether Trump will seek any form of military action against Pyongyang. (01.05.2017)