The US defense secretary is set to brief President Trump on options for reducing the US military presence in Germany. The plans, which came as a surprise to Berlin, may well include sending some troops to eastern Europe. 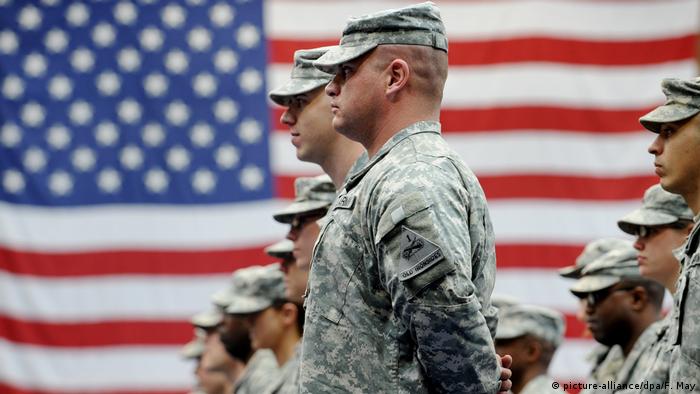 US Defense Secretary Mark Esper will soon present President Donald Trump with a range of possible plans for pulling US troops out of Germany, the Pentagon said on Saturday, with officials suggesting many would be moved to former Soviet-bloc countries as a warning to Russia.

"On Monday, the secretary will brief the president at the White House on options for our force posture in Germany," said Pentagon spokesman Jonathan Hoffman.

Two senior Pentagon officials speaking on condition of anonymity were cited by the AFP news agency as saying the plan would call for a reduction of troops to 25,000, as announced by Trump on June 15. They said this would mean the withdrawal of 9,500 troops. Trump said the withdrawal would be a punishment for what he sees as Germany's inadequate military spending.

The officials said that some of those 9,500 troops would return to the US, while others would be transferred to eastern European countries as a warning to Russian President Vladimir Putin, whose government's 2014 annexation of Crimea is seen by Washington as a sign of dangerous military ambitions.

Although the officials did not specify which countries, Trump told Polish President Andrzej Duda at a meeting in the White House on Wednesday that Poland would be one of the European states to receive troops.

On Friday, Defense Secretary Esper visited NATO headquarters in Brussels and tried to reassure allies that they would be consulted on any future troop movements, after Trump's announcement came as a surprise both to the German government and partners at the military alliance.

Esper, however, did back Trump's criticism of Germany, saying that he continued "to urge all of our allies to meet their target goal of 2% of GDP." Germany currently spends about 1.38% of gross domestic product on defense spending and aims to increase it to 1.5% by 2024. This compares with the US apportioning 3.4% of GDP to defense, with spending that is more than that of all the 29 other NATO allies combined.

In an interview with six European newspapers published on Friday, Chancellor Angela Merkel, while conceding that her country should increase military spending, argued that "American troops in Germany help to protect not only Germany and the European part of NATO but also the interests of the United States of America."

On Saturday, however, Merkel faced calls from the Social Democratic Party (SPD), her center-left junior coalition partner in government, to take a clearer stance on the planned US troop withdrawal.

"What has been said up to now is definitely too little," SPD parliamentary leader Rolf Mützenich told the daily Tagesspiegel.

The presence of US military personnel in Germany is a legacy both of the post-WWII Allied occupation and the Cold War. Although its supporters see the deployment as boosting security, critics, particularly those on the left of the political spectrum, feel that it has outlived its purpose and have welcomed Trump's announcement of a reduction.

The Pentagon says there are between 34,000 and 35,000 US soldiers permanently stationed in Germany.