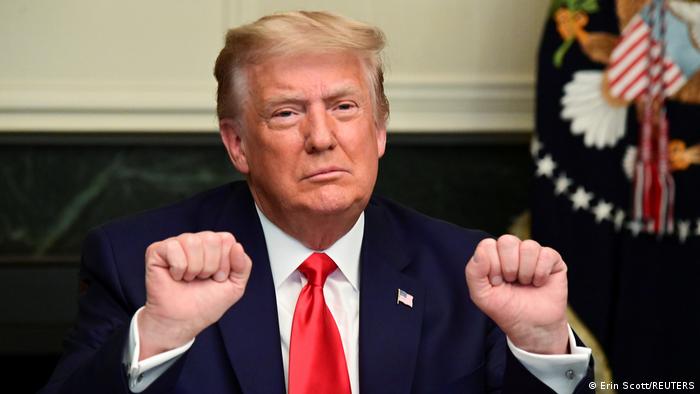 US President Donald Trump said Thursday that he will leave the White House if the Electoral College formalizes President-elect Joe Biden's victory.

"Certainly I will. And you know that," said Trump when asked if he would leave should the Electoral College vote for Biden. But he insisted that "a lot of things" would happen between now and then that might alter the results.

"This has a long way to go," Trump said, even though he lost.

Trump has not formally made a speech conceding the presidential election, as is customary of the losing candidate in the presidential election. Instead, he has launched several lawsuits in swing states that he lost alleging "massive fraud," even though state officials and international observers have said no evidence of that exists and Trump's campaign has repeatedly failed in court.

Even if he said he would leave the White House, Trump made clear that he will likely never formally concede. "It's gonna be a very hard thing to concede. Because we know there was massive fraud,'' Trump said, noting that, "time isn't on our side.'' If the Electoral College votes against him, he added, "they've made a mistake.''

The president has not confirmed whether he would or would not attend Biden's inauguration on January 20, saying he knew the answer but didn't want to share it yet.

Tradition dictates the current serving president receive the incoming president at the White House before traveling to the US Capitol building, where the new president will be sworn in.

Biden is projected to receive 306 Electoral College votes when it convenes on December 14. Trump is expected to get 232. A candidate must receive at least 270 votes to become president. The vote will be confirmed by Congress in January.

The coronavirus pandemic forced both the sitting president and president-elect to spend Thanksgiving in different ways than they are accustomed to.

Biden spent the holiday in the small town of Rehoboth, Delaware, where he and his wife Jill have a vacation home. Their family normally holds a large gathering on the island of Nantucket off of Massachusetts, but stayed in Delaware "with just a small group around our dinner table" due to the pandemic.

"I know this isn't the way many of us hoped we'd spend our holiday. We know that a small act of staying home is a gift to our fellow Americans," said Biden in a message on Twitter. "I know better days are coming."

Trump typically spends holidays at his Mar-a-Lago resort in Florida. But he spent part of the morning at his Trump National Golf Club in Virginia, where he played a round of golf.

Last Thanksgiving, he made a surprise visit to US troops in Afghanistan, where he served traditional turkey to soldiers before sitting down to eat dinner with them.

Google threatens to block Australia from search engine 1h ago