Trump or Clinton - whom does Wall Street favor?

As Americans go to the polls to elect a new leader, investors seem concerned and not particularly enthused by the two presidential contenders. DW examines the reasons behind their anxieties. 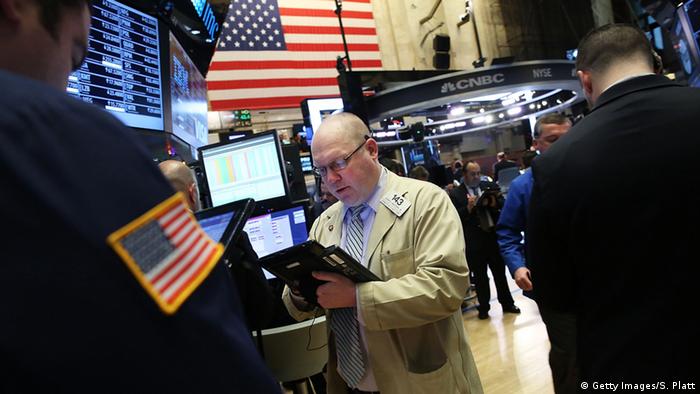 Wall Street is one of the hot-button issues of the 2016 US presidential election campaign season. During their campaign trails, the nominees of both major parties - Democrat Hillary Clinton and Republican Donald Trump - have been very critical of its practices and stressed their predilections to reform the US financial industry.

Their rhetoric is no surprise, given the negative image bankers and financial institutions currently enjoy with the American electorate. After all, they are widely seen as the culprits that triggered the 2008 financial crisis, from which the economy has yet to recover completely. Its aftereffects are still being felt by a significant proportion of Americans, whose dreams for well-paying jobs and better lives were shattered by the onset of the crisis.

Eight years after the financial market turmoil, Wall Street continues to be haunted by controversies and scandals. And like no other sector of the economy, the finance industry is characterized by greed, ruthlessness and unscrupulousness in public consciousness.

The situation offers an opportunity for the presidential candidates to endear themselves to the voters by lambasting the finance industry.

At a campaign event earlier this year, Clinton said she was determined to take action against Wall Street, close loopholes and take measures to reduce executive pay.

Who will be the next US president?

The presidential contender also referred to the 2010 Dodd-Frank legislation, which was enacted in response to the crisis. She noted that the act has allowed the government to keep banks in check, by imposing higher capital requirements and stringent controls on their activities. Saying that she's proud of the government's efforts, Clinton stated that if elected president, she would implement the Dodd-Frank regulation much more vigorously.

Her Republican rival, Trump, also rants at the New York Stock Exchange (NYSE) and Wall Street's perceived excesses. He blasted the industry in an interview with Fox News in April and underlined that he would take measures against those on Wall Street for earning too much but paying too little in taxes.

While there is little agreement between Clinton and Trump on a host of other problems afflicting the country, the two seem to be remarkably steadfast when it comes to their narrative of reining in the financial sector.

But despite their stringent criticism, it's unclear how determined they are to actually turn it into concrete measures in the aftermath of the November election. That's because both of them have had extensive dealings with the industry spanning several decades, damaging their trustworthiness on this front. Trump, himself a businessman, has been criticized for having paid too little tax by exploiting provisions in the US tax code. It's doubtful that he really wants to close these loopholes.

Clinton, on the other hand, has had a difficult time justifying her highly paid speeches at banks, for which she received astronomical sums.

Although she's spent 30 years in the public eye, many voters still feel they don't know the real Hillary Clinton. Her biographers say that's because the Democrat is a complex - and sometimes contradictory - personality. (31.10.2016)

Top Senate official Harry Reid says FBI director James Comey may have broken the law with revelations about a probe into Hillary Clinton's emails. Reid said it appeared Comey was trying to influence the election. (31.10.2016)

Just how far will the nativist vote get Trump and the AfD?

Donald Trump's anti-foreigner campaign has US voters wondering - and worrying - just how far he might go. The Alternative for Germany is banking on similar sentiments to score it several seats in the Bundestag next year. (29.10.2016)

And while Trump has so far refused to release his tax returns, Clinton hasn't released the transcripts of her speeches. However, hacked emails released by WikiLeaks give an insight into Clinton's views over the sector. According to them, in one of the speeches, Clinton even partly absolved bankers from the blame for causing the financial crisis.

Against this backdrop, does it really matter for Wall Street who the next president is? Stock trade Peter Costa answers in the affirmative. Costa, who has been trading on the floor of the NYSE for 35 years, has seen six different presidents come and go – three from each party. "The markets have always performed well under the Democrats."

American corporate tax - at around 39 percent - is among of the highest in the world. Stressing that he wants to reinvigorate American business by slashing taxes and easing regulation, Trump has said that he would reduce the tax rate from 39 to 15 percent.

He also intends to protect the domestic economy from cheap imports stemming from abroad while boosting exports, and in this way control America's runaway trade deficit.

Experts say Trump's policy is reminiscent of the one adopted under former President Ronald Reagan in the 1980s. "It's clearly aimed at the supply side," says Oren Cass from the Manhattan Institute, who supported Republican Mitt Romney in the 2012 presidential election. At a first glance, Trump appears as the dream candidate of Wall Street.

Nevertheless, Wall Street is not a fan of the Republican. "The problem with Trump is quite different - he is very unpredictable for us," says Costa. Donald Trump does not present any concrete plans and the thing that investors hate most is uncertainty.

This is precisely Clinton's advantage, point out analysts, highlighting that she is the more stable candidate in this election. And she at least has a plan, even though Wall Street does not like it.

Although the Democrat wants to leave tax rates unchanged, she wants to tighten the Dodd-Frank Act, much to the consternation of Wall Street.

"Still, Hillary is still being Hillary which is: she has a plan, she has a focus, she has an idea and whatever she is going to put into place, you know what it is," Costa underlined.

"And even with Hillary's tax plan, which is extremely complicated, you got to give her credit. I am not a big fan of hers but if you have some clarity before the elections, you kind of know what you will be getting after the election and I think this is Hillary's add on on Trump."

China: How Clinton/Trump Halloween masks are made

Even the fact that Trump is a businessman doesn't impress many on Wall Street, where there is an acute recognition of his high-profile failures involving the Trump Airlines, the Trump University and his casino business.

How the markets will react?

Costa says the markets would drop if Trump won the election. This view is supported by a host of studies. Research institute Macroeconomic Advisers, for instance, estimates that stocks would fall by eight percent. To come up with this figure, researchers analyzed results of voter surveys and their impact on share prices. They found a negative correlation between Trump's popularity and stock market movements, indicating that investors are more worried about the prospect of electing Trump, rather than Clinton, to the White House.

"I'm not a Clinton fan, no one here is," says Costa. He is not alone in sharing this view. Yet, Wall Street has decided to go for Clinton as if finds the alternative - a Trump presidency - too worrisome to contemplate.