Sinking poll numbers and a feud with leading Republican Paul Ryan have overshadowed Donald Trump's election campaign. In an interview, Ryan reiterated that his support for the presidential nominee is not guaranteed. 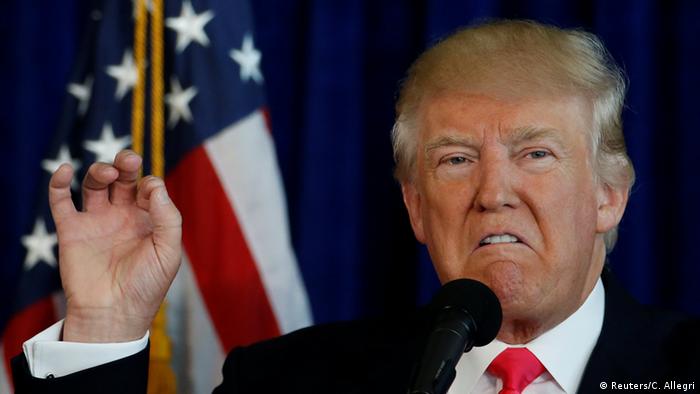 Ryan said he would continue to back Trump despite the swirling controversy after Trump lashed out at the family of decorated soldier Capt. Humayun Khan. But "none of these things are ever blank checks," he said.

Trump was widely attacked last week after he criticized the family of the Muslim-American soldier, who was killed in action in Iraq in 2004.

He has since declined to endorse Ryan and Senator John McCain, the party's 2008 nominee, in their congressional re-election campaigns.

Trump under fire from Republicans over Khan comments

Top Republicans have criticized Trump for comments he has made about the Muslim family of a US soldier killed in Iraq. The taboo attack on military families is stirring a growing backlash. (02.08.2016)

Republican convention gets off to raucus start sparked by internal divisions

The Republican convention in Cleveland is supposed to bring the party together behind its presidential candidate, but the GOP remains divided. The list of no-shows includes former presidents and past nominees. (18.07.2016)

The latest poll from NBC News and the "Wall Street Journal" has Clinton leading Trump by nine points nationally, 47 percent to 38 percent.

Speaking at a campaign stop in Portland, Maine on Thursday, Trump sought to distract from his troubled campaign with a familiar theme.

"We are letting people come in from terrorist nations that shouldn't be allowed because you can't vet them," said Trump, who has built his campaign around an anti-immigration platform. "You have no idea who they are. This could be the great Trojan horse of all time," he said.

Speaking at the Pentagon, US President Barack Obama launched his own critique of the struggling Republican candidate days after Trump warned that the November election could be "rigged."

"If Mr. Trump is suggesting there is a conspiracy theory that is being propagated across the country, including in places like Texas, where it is typically not Democrats in charge of voting booths, that is ridiculous," Obama told a press conference.