The Republican presidential candidate has reaffirmed his comments, claiming the US president was aided by Hillary Clinton. The US leads a coalition in airstrikes against the group calling itself the "Islamic State." 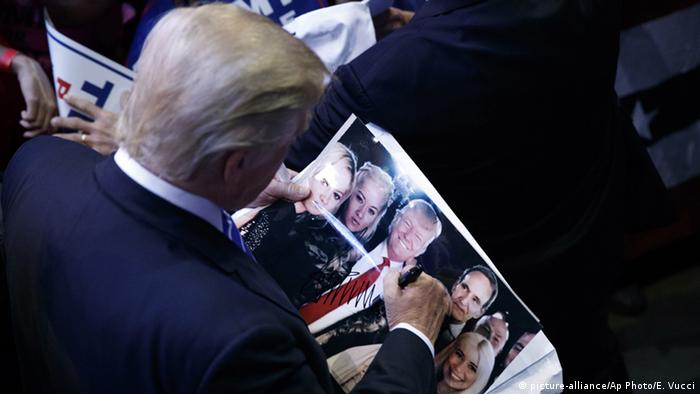 Hillary Clinton says Donald Trump engaged in incitement by calling for gun enthusiasts to prevent her from nominating Supreme Court justices. The Republican had made the remarks at a rally in North Carolina.

"He was the founder of ISIS. And so was she. I mean, I call them co-founders," Trump said, referring to the militant group by one of several common acronyms.

When asked if it was appropriate for him to claim that a militant group that targets Americans was founded by a sitting US president, Trump said "absolutely."

"Is there something wrong with saying that? Why - are people complaining that I said he was the founder of ISIS? All I do is tell the truth - I'm a truth-teller," he said.

IS in Iraq and Syria spawned out of the al Qaeda insurgency in the wake of the US invasion of Iraq in 2003, led by former Republican President George W. Bush. The withdrawal of US troops from Iraq in 2011 helped create the vacuum IS fighters exploited, while the group's early military gains were fueled in part by western weaponry seized from defeated or retreating Iraqi army units.

The militant group in 2014 declared a caliphate after taking large swathes of land in Syria and Iraq, and committing genocide, war crimes and crimes against humanity, according to the UN.

Authorized by Obama, the US launched airstrikes against the group on August 2014, and the following month formed a coalition of anti-"Islamic State" forces to battle the militants.

Obama has not responded to Trump's comments, but Clinton's spokesman Jesse Lehrich criticized the billionaire, saying US-backed militias captured the group's stronghold in Libya "thanks to Obama-authorized airstrikes."

Trump has come under widespread criticism for his controversial comments, including from members of his own party.

His most recent scandal arose when he seemed to indirectly endorse violence against Clinton, in which he said: "Hillary wants to essentially abolish the Second Amendment. If she gets to pick her judges, nothing you can do folks - although, the Second Amendment people, maybe there is, I don't know."

The Second Amendment to the US constitution referred to by Trump states that "the right of the people to keep and bear arms shall not be infringed."

Patti Davis, the daughter of the late US President Ronald Reagan, who survived an assassination attempt, slammed Trump for his comments.

"I am the daughter of a man who was shot by someone who got his inspiration from a movie, someone who believed if he killed the president, the actress from the movie would notice him. Your glib and horrifying comment about 'Second Amendment people' was heard around the world," she said.

Americans are expected to head to the polls on November 8 to vote for the next US president.