Trump absent as Republican candidates face off in Iowa

Republican presidential candidates have held a TV debate in the US state of Iowa. Donald Trump, the frontrunner for the nomination, boycotted the event over a feud with host Fox News. 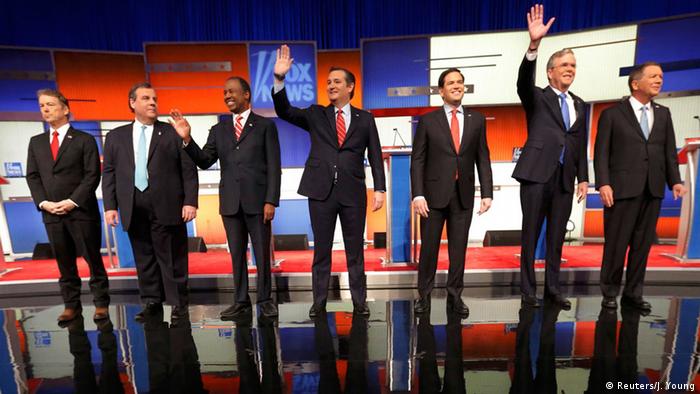 As the 2016 Republican candidates took to the stage to make their final appeals to Iowa voters on Thursday, billionaire businessman Donald Trump was hosting his own competing event a few miles away.

Trump pulled out earlier this week, accusing Fox News, and particularly debate moderator Megyn Kelly, of treating him unfairly. His feud with Kelly dates back to the first Republican primary debate, when she took him to task over derogatory statements Trump had made in the past about women.

As Thursday's debate got underway, Trump's fellow candidates capitalized on his absence to make their case. Main rival Texas Sen. Ted Cruz chided Trump for failing to "show up."

"I want to thank everyone here for showing the men and women of Iowa the respect to show up and make the case to the people of this state and the people of the country why each of us believe we would make the best commander in chief," he said.

Former Florida governor Jeb Bush, who has long been a target of Trump attacks, also chimed in: "I kind of miss DT."

"We always had such a loving relationship in these debates and in between, and the tweets," he said.

The high-stakes event comes four days before Iowa residents choose among the 12 Republican and three Democratic candidates battling to be their party's 2016 presidential nominee.

Trump is the first major candidate to skip a pre-Iowa caucus debate since Ronald Reagan in 1980. Analysts say his decision to stay away is a gamble for the mogul, who has led the Republican race in national polls for months.

In Iowa, polls suggest Trump is locked in a tight race with Cruz, a favorite of the conservatives and evangelical Christians who hold significant sway in the state's Republican caucuses.

A recent CNN/ORC poll of Republican voters has Trump at 41 percent to 19 percent for Cruz, with more than two-thirds of Republicans saying they believe Trump will be the party's presidential candidate.

Billionaire real estate mogul Donald Trump has announced he will boycott the last Republican presidential debate before the Iowa caucus. The unorthodox move is likely to shine more attention on the frontrunner. (27.01.2016)