After six months in prison, the trial of the prominent dissident journalist and DW correspondent Gao Yu for "leaking state secrets" has begun in China. Her lawyer maintains her confession was made under pressure. 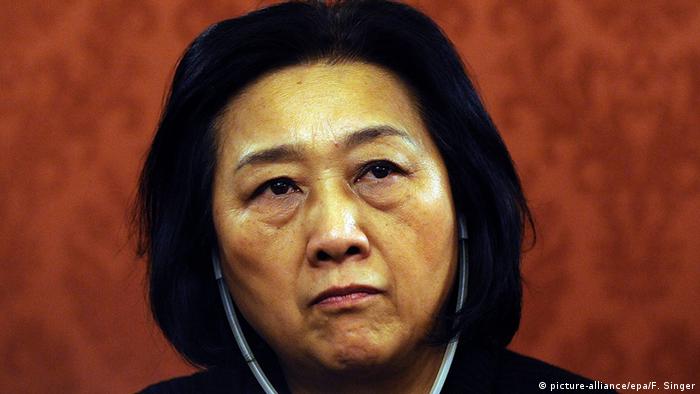 DW Director General Peter Limbourg stated the way the Chinese government has treated 70-year-old jailed writer Gao Yu was intolerable: "We hope there will be a fair trial now," Limbourg said. "China has the chance now to show that journalists and bloggers can work in their country without having to fear to lose their personal freedom."

Gao is accused of "delivering state secrets to foreign countries." Her trial will be held behind closed doors, although according to media reports some foreign diplomats, including some from EU countries, have submitted requests to observe the hearing. Mo Shaoping, however, thinks it is unlikely this will be allowed.

Just how secret was the alleged secret document?

Having worked for, among other places, DW, Gao had already spent a total of seven years in prison in the 90s, also on charges of stealing state secrets. According to Chinese state media, her arrest in April of this year was made on the grounds that she had passed on "a highly confidential document" to a "source outside the country." Some observers have speculated this was the so-called "Document No. 9," in which the Communist Party of China identifies potential threats, and calls for strict ideological controls.

At a preparatory meeting on Monday, the accused's lawyers requested the nature of the document be reviewed. "That is, we want to know whether the document ever was a state secret, and if so, it would have to be clarified exactly how confidential it was," Mo Shaoping, lawyer for the 70-year-old jailed writer and journalist told DW, adding that he must of course carefully examine the charges against his client. "I will look closely at the evidence's validity and relevance."

According to Mo, the preparatory meeting lasted about one and a half hours. One of the meeting's focuses was the application to leave out "illegally procured evidence." Mo says Gao's confessions weren't valid proof, as they been obtained under heavy duress from the police.

In a video broadcast on May 8 by China's state television channel CCTV, Gao showed "remorse" for her "crimes." Later she told her lawyers that the police had threatened to put pressure on her son, who was also being detained. Mo told DW the judge had taken the request to exclude Gao's confession from the evidence, but had not initially granted it. Meanwhile, the prosecution argued that Gao's confessions were in no way illegal.

Gao Yu's health is also in question. According to Mo Shaoping the meeting on Monday had to be interrupted so that his client could take her medication. The presiding judge asked Gao whether her health was good enough to last the duration of the trial. Her lawyer said she answered: "I'll get through it."

"An ambulance will probably be on standby on Friday, just in case," Mo said.

A Chinese court has rejected the appeal of prominent Uighur scholar Ilham Tohti against his life sentence for "separatism." This comes as journalist Gao Yu is tried on charges of leaking state secrets. (21.11.2014)