Trial for murder of reporter Jan Kuciak begins in Slovakia | Europe | News and current affairs from around the continent | DW | 18.12.2019

Trial for murder of reporter Jan Kuciak begins in Slovakia 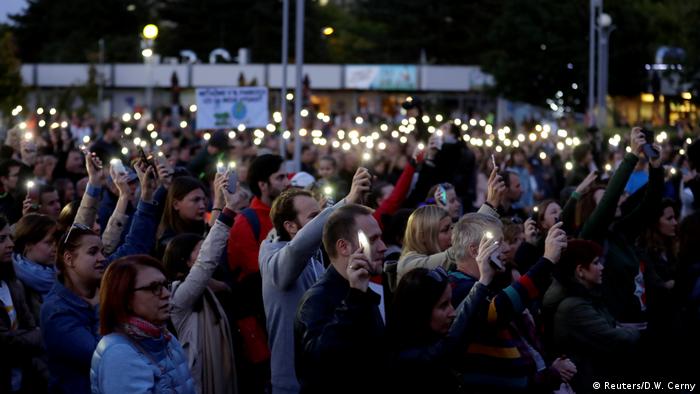 Jan Kuciak was an investigative journalist whose writing made powerful people in Slovakia very uncomfortable. He frequently wrote about deals between businesses and the government on the site Aktuality.sk. Those deals ranged from dubious to criminal in nature.

Kuciak and his girlfriend, Martina Kusnirova, were killed on Wednesday, February 21, 2018, but police didn't find their bodies until days later. And Police Chief Tibor Gaspar did not inform the public of the incident until the following Monday.

Two days later, on February 28, the first protests began in the capital, Bratislava. "We Don't Want to live in a mafia state," demonstrators said. They believed that Kuciak had been killed by those he was writing about.

Slovaks turned out en masse to protest Prime Minister Robert Fico because they were reminded of the 1990s, when Vladimir Meciar ruled the land with methods having nothing in the least to do with rule of law. They remembered how, in 1995, President Michal Kovac's son was kidnapped and taken to Austria. They remembered the 1996 car bomb that killed the former police officer Robert Remias, a key figure in the investigation of the kidnapping. His murder was never solved, and many suspect that Slovakia's undercover counterespionage unit, the SIS, was involved.

Read more: Two journalists were murdered — but their investigations live on

The last article Kuciak published before he was murdered was devoted to a man whom he had written about before — a man who had previously threatened him: the businessman Marian Kocner. The last article to bear Kuciak's byline was published one week after his death. It described connections between Italian-owned companies operating in eastern Slovakia, Calabria's 'Ndrangheta mafia and Slovakia's ruling social democratic party Smer.

The article paid particular attention to Fico's assistant: Maria Troskova. On March 22, 2018, the prime minister and his entire administration stepped down.

It soon became clear that the authorities' prime suspect, the 'Ndrangheta, was not involved in Kuciak's murder. Instead, evidence soon pointed to homegrown mafia groups.

On March 8, 2019, Kocner was formally accused of having contracted the killing. The trial begins Thursday.

Alena Zsuzsova, Tomas Szabo and Miroslav Marcek will be co-defendants. Marcek is thought to have pulled the trigger; Szabo was said to be his accomplice.

Zoltan Andrusko was the link connecting the suspects to Alena Zsuzsova. Initially, Andrusko will only appear as a witness, but: "That doesn't mean he won't stand trial himself eventually. Though he can expect a reduced sentence in exchange for his guilty plea and his cooperation with investigators," as journalist and author Martin Milan Simecka tells DW. Andrusko could face anywhere between 25 years to life in prison.

Kocner was already in jail in connection with a million-dollar felony scheme when he was charged with Kuciak's murder. "There are very few affairs in Slovakian politics that don't involve Kocner," the journalist Monika Todova wrote in the daily newspaper Dennik N in 2018.

The businessman first garnered attention for his involvement in the year 2000's Technopol affair, in which $2.3 million was paid for goods that were never delivered. In his fight against the special prosecutor's office investigating corruption and fraud in the Glance House case, Kocner enjoyed the backing of Dobroslav Trnka — who served first as assistant attorney general, and then attorney general.

In 2013, a representative from OTP Bank, which was also involved in the deal, contacted police in Slovakia. The representative claimed Kocner had threatened to "put a bullet through the head" of the bank's lawyer, Roman Kvasnica.

Over the course of the three-year trial, Kvasnica said there was no way that Kocner would ever appear in court because he is "backed by the absolute power of the state."

Recently, investigators discovered a veritable treasure trove of information when they searched Kocner's cellphone. One of the most shocking details to emerge was the existence a cache of chats on one of the phone's apps. They involved Monika Jankovska, the assistant justice minister; Alena Zsuzsova, one of the defendants in the Kuciak case; businessman Norbert Bodor, who is also related to former Police Chief Gaspar; Judge Vladimir Sklenka; and state prosecutors Bystrik Palovic and Peter Sufliarsky.

The political scientist Grigorij Meseznikov has no doubt that Kocner will try to stall. But he said he expected that the work of prosecutors and judges would be legally unassailable. "This trial will be taking place under the very watchful eye of the public," he told DW.

Journalists in Mexico are being killed at the rate of almost one a week this year, despite claims from the government that the situation is under control.