Trial Against Al-Qaeda Suspects Begins in Düsseldorf | Germany| News and in-depth reporting from Berlin and beyond | DW | 09.05.2006

Strict security measures were in place Tuesday at the start of a trail in Düsseldorf against two alleged terrorists of the al-Qaeda network. A third man is accused of supporting the terrorist organization. 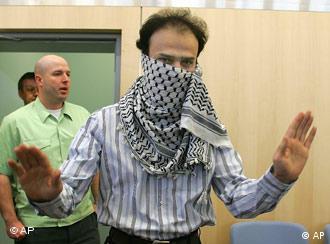 Ibrahim Mohamed K. is the primary defendant in the Düsseldorf case

The primary defendant is 30-year-old Ibrahim Mohamed K., who is apparently from Syria. German prosecutors said he was involved in the command of al Qaeda and that he had contact with the organization's leader, Osama bin Laden.

Ibrahim Mohamed K. came to Germany as an asylum-seeker. He began working in Germany in 2002, raising money and providing "logistical support" for al Qaeda, officials said. With German travel documents, he was able to move freely around Europe. He apparently sought to obtain nuclear materials, but was unsuccessful. Police arrested him in Mainz in January 2005.

In 2004, Mohamed recruited the students Yasser Abu S. and Ismail Abu S., who are brothers, to be a member of the organization and a supporter, respectively. Yasser Abu S. was apparently scheduled to perform a suicide bombing in Iraq.

The suspects allegedly earned money through insurance fraud to support international terrorism. Officials said Mohamed and Yasser attempted to raise money by taking out an 800,000 euro ($1 million) life insurance policy on Yasser, who intended to fake a fatal traffic accident and use the money for terrorist purposes.

The trio is accused of 10 counts of fraud and 23 counts of attempted fraud. According to the courts, none of the suspects has confessed.

Judge Ottmar Breidling will preside over the trial at the Higher Regional Court in Düsseldorf. Breidling has already convicted several other members of the al-Tawhid terrorist group, which has ties to al Qaeda.

The criminal division in Düsseldorf has scheduled the trial to be heard over the course of 52 days.

An al-Qaeda suspect arrested in Pakistan on Sunday night was carrying a computer with maps and details of German and Italian towns saved on its hard drive, according to Pakistani security sources. (Aug. 9, 2005)

Europe's biggest trial of a suspected al-Qaeda cell ended this week with 18 of 24 defendants being convicted for collaborating with a terrorist group. But what sort of example has it set for similar cases in the future? (Sept. 30, 2005)

Mounir El Motassadeq, the man accused of aiding the Hamburg cell which perpertrated the Sept. 11 terror attacks in the United States, was convicted by a German court on Friday and sentenced to seven years in prison. (Aug. 19, 2005)