There are only 800 mountain gorillas left in the wild and half of them live in Uganda's forests. A biologist from Leipzig's Max Planck Institute has learned a lot about them by analyzing their feces. 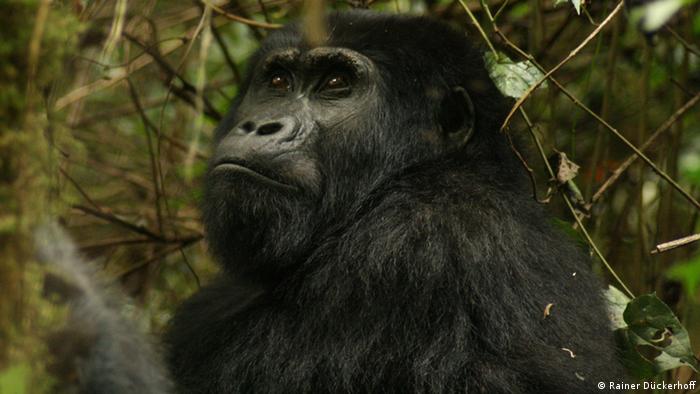 It's early morning and two dozen tourists have gathered at the edge of the Bwindi Impenetrable National Park in southwestern Uganda. They're hoping to visit with the rare mountain gorillas that live here. Kathrin Paul and her daughter Teresa have joined the group. "I am a veterinary assistant and I just feel drawn to animals," Teresa says with enthusiasm. "My mother was coming, so I just had to join her!" Both mother and daughter are eager to see the impressive gorillas right here in the wild.

Mountains gorillas can only be found in Uganda, Rwanda and the Democratic Republic of Congo. There are only 800 left. 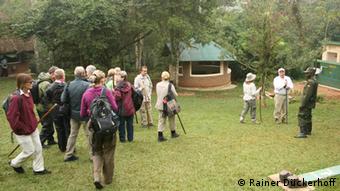 Tourists prepare to track the gorillas

The species is in danger of extinction. About half of the world's remaining mountain gorillas live in Bwindi. Visitors are willing to pay 400 euros ($500) for the chance to visit the great apes. It took park employees many years to get individual gorilla groups comfortable with human visitors.

Not a petting zoo

Gaad, the local tour guide, has gathered a group of vistors around him. "Remember, you're going to see mountain gorillas," he jokes. "You have to climb mountains. If you're not fit enough to do that, you should go home, practice jogging, and come back again." The group laughs. Gaad then explains the rules. "We don't want you to be in direct contact with the gorillas. They could contract diseases. So, you have to keep at least a 7-meter distance." Eating and drinking when near the gorillas is forbidden, he says, and so is taking pictures with flash.

Each gorilla family is allowed to receive a maximum of eight visitors each day. The visit only lasts one hour. Gaad separates the group into smaller units, each of which will visit a different gorilla family. He will guide the group Kathrin and Teresa are in.

"I know all of you are excited and want to see the gorillas," Gaad calls out. "Let's go!" He leads the way and Teresa, Kathrin and six others follow, accompanied by six local rangers. For security reasons, two armed soldiers travel with the group.

Walking along a narrow, meandering path, the group makes its way up the mountain. Trackers, who left the tour's starting point an hour earlier, spot the gorillas and inform Gaad via walkie-talkie.

Martha Robbins, biologist at the Max Planck Institute for Evolutionary Anthropology in Leipzig, knows a lot about these gorilla families. She counts the gorillas every five years to see whether wildlife conservation measures have been successful.

"Sure, for those gorillas that are visited every day you can easily say if their population has declined or increased," Robbins explains. "But half of these animals are not accustomed to humans. They live in the middle of the park, we don't see them and we don't know what's going on." 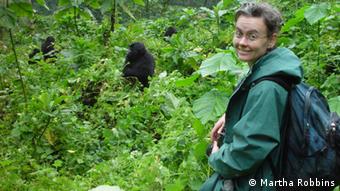 Last year, Robbins and her team combed the woods, looking for gorillas and collecting samples of their feces. They covered a lot of terrain. The national park stretches along for 330 square kilometers (205 square miles).

The team focused their efforts on finding sleeping nests. Gorillas sleep on the ground and build a new nest every night. The researchers gathered feces from those nests, which they used to create a catalogue of gorilla DNA samples in the lab. Robbins expects the results from this genetic analysis by the end of this year. The information will help her determine how many gorillas are living in the national park. Each gorilla has a unique DNA signature and a tally of individuals will indicate whether the population is in decline. 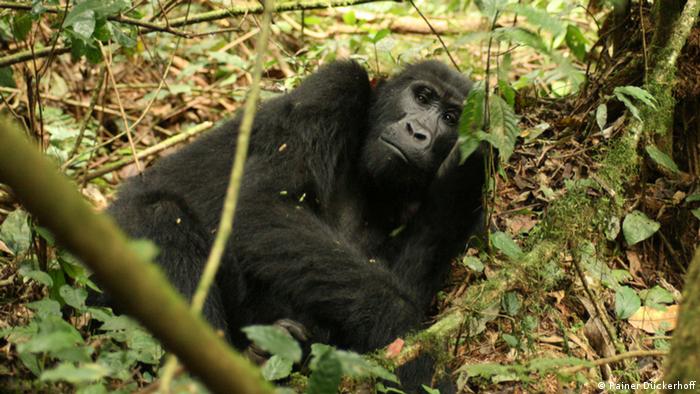 The number of mountain gorillas is on the rise, but they are not out of danger

After walking for more than an hour, Gaad and his group of tourists arrive at their destination. They have climbed to an elevation of 1,800 meters (6,000 feet). The well-kept walking trail gives way to more difficult terrain. Kathrin and Teresa push through thick underbrush, climb over fallen trees and fight off huge ants.

"These three boys here are the trackers", Gaad introduces three additional guides who have joined the group after a break. "They have found the gorillas and will now lead us to them." The tourists get excited and pull out their cameras. The first gorilla has already approached the group and is now lying in the grass nearby. Teresa excitedly takes a couple pictures.

One by one, the tourists approach the small family of gorillas. They kneel down and take pictures. Gaad cuts the brush with his machete so that the tourists can get a better view. The gorillas don't seem to be disturbed by their human audience, but is this close contact healthy for the endangered animals? 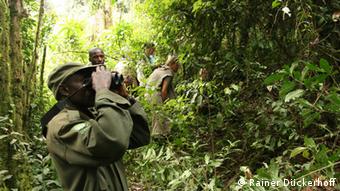 This tracker is an expert at finding gorilla familes

The gorillas eat a bit less when tourists are around, biologist Robbins says, but apart from that, she says their behavior has not changed. "We don't see any signs of a lower birth rate, for example," she explains.

"If anything, those gorillas who are accustomed to humans are better off than unaccustomed groups since they are visited every day and closely monitored."

After exactly one hour, Gaad pushes the group to leave. One last snapshot and then it is time push back through the thick underbrush.

"It was really impressive," Teresa says enthusiastically. "Now I can understand why Dian Fossey spent day and night with these animals." Dian Fossey was a primatologist and behavioral scientist from the United States who fought for the protection of the mountain gorillas until she was murdered in 1985.

The population of mountain gorillas has recovered somewhat since the 1980s but Robbins wants conservation work to continue. "Even if their population is rising, we shouldn't be self-satisfied and think we don't have to worry about them anymore," she says. "Their habitat is very small and there are so few of them that we still need to be extremely careful. We need to continue trying to protect them."

An international team of scientists has successfully sequenced the genome of the gorilla – the last great ape to have its genes decoded. Humans, it turns out, have more in common with gorillas than once thought. (08.03.2012)

New projects to save Rwanda's gorillas are also helping improve livelihoods in towns and villages. (20.12.2011)