Tour de France starts in Belgium: Cycling as a lifestyle

At the start of the 2019 Tour de France, Belgium enjoyed a huge cycling party. The country's love for cycling is deeply ingrained in its culture — and not even a Dutch win could dampen the atmosphere. 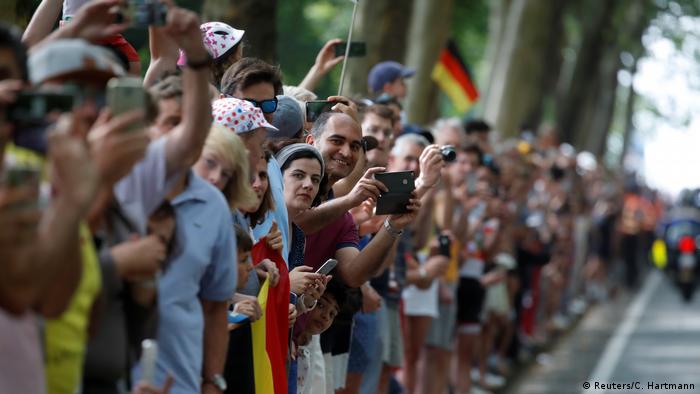 You might almost have thought he was racing. In the center of Brussels, cycling fans chanted: "Eddy, Eddy, Eddy!" Belgium's five-time winner of the Tour, Eddy Merckx, is one of cycling's greatest representatives, and although the 74-year-old hasn't raced for 41 years now it mattered little to all of those cheering on in Belgium's capital.

"Eddy is still such a hero for us. He was and always will be," said Jan-Frans Lemmens, who stood with his bike waiting for the peloton of the 2019 Tour de France to start.

The 45-year-old, born in Brussels, was focused on only one thing on Saturday. He wanted to watch the race from three different spots, and take in the entire atmosphere of the "Grand Départ" on Belgium's cycling holiday. "It's a magical feeling to have the Tour with us. I was always going to be here on the route. Cycling is a part of my life," he said. 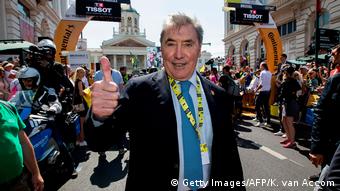 That's how it is in Belgium. Cycling is part of the culture. There are approximately 14,500 kilometers (9,000 miles) of cycling paths across a country that is only about 280 kilometers long. On weekends, there are often more bikes than cars on the rural roads. And just watching others cycling is also part of the culture here. In the spring races on the rough cobblestone streets of Flanders, people stand and cheer. They're at the cyclocross, a race that leads riders through mud, sand and sometimes even through pubs. They're even at the amateur races. People watch cycling, sometimes with a strong, blonde Belgian beer in their hand.

Lemmens first watched the Tour as a 6-year-old with his father. "I caught the cycling bug immediately," Lemmens said. When the cyclists fly by, Lemmens and his friends celebrate. It's clear how much of a fan he is. A few seconds later, the spectacle is over. Reports suggest Lemmens was one of 500,000 people standing shoulder to shoulder in Brussels watching the Tour.

Even outside the city, in the streets of Flanders, the real heart of Belgium's cycling tradition, hundreds of thousands stood on the roadside celebrating the Tour, the 20 Belgian cyclists (Belgium has the second-most number of participants on the Tour, behind France's 34) and themselves.

Take the legendary Muur van Geraardsbergen, for example. It's a short, steep cobblestone slope leading up to a small chapel, where, according to media reports, 10,000 people host an open-air festival for cyclists. The celebrations are huge when countryman Greg Van Avermaet won the first mountain points, securing him the polka dot jersey. 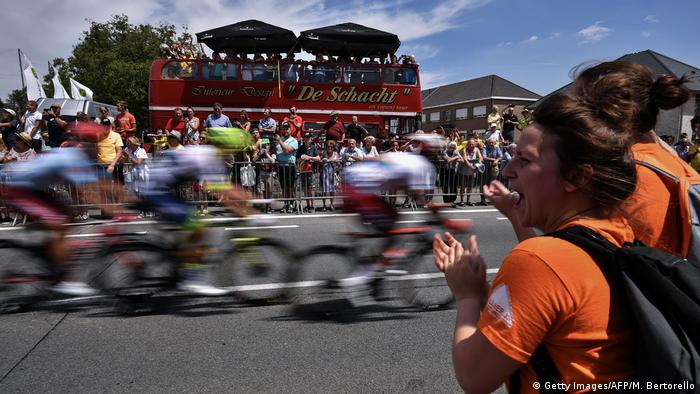 The opening stage was a huge spectacle for those watching on

Where does the Belgian love for cycling come from? Before the opening stage, pro cyclist Yves Lampaert was at a supermarket for a sponsor's event. When asked, the 2018 Belgian champion didn't have to wait long before giving an answer. "We have a huge history of cycling. We've had great cyclists in every generation, which motivates kids to get involved. There are so many clubs that support them and there are even lessons at school," he told DW.

His team manager, Patrick Lefevere, went even further. "Cycling is a lifestyle in Belgium. Everyone wants to be involved, everyone shares in the thrill. It's a really special feeling to be a part of it all," he said.

For his Deceuninck-QuickStep team, the fact the opening stage is in Belgium is something quite special. The team in blue worked all day to prepare for the sprint, with one big goal in their sights: the yellow jersey at the start of the Tour in their home country.

A Dutchman spoils the party But in a hectic finish on the inclining stretch of the Avenue du Parc Royal, many plans were ruined. The Deceuninck-QuickStep team sprint finish was exemplary, but Italian sprinter Elia Viviani couldn't stay with the lead group. Top favorite Dylan Groenewegen from the Netherlands fell, and superstar Peter Sagan took the lead but ran out of gas in the final meters. In the end, Dutchman Mike Teunissen triumphed by the width of a bike tire, inching past Sagan and ending a long Dutch drought. The last time a Dutchman wore the yellow jersey was 1989.

But the atmosphere at the finish line wasn't ruined. Crowds of fans circled the buses of the Belgian teams, trying to get autographs or a photo. Nearby, sweat dripped from Kevin van Melsen's head as beneath him his legs slowly rotated. The Belgian was riding in his first Tour de France, and a few minutes after coming through the finish line everything he had just experienced along the 194.5 kilometers first stage was still fresh in his mind.

"There were a remarkable amount of people on the streets. It was incredible," the 32-year-old beamed. "In some small towns I could hardly understand anything because it was so loud. To see that amount of excitement really made me happy."

He speaks softly and isn't one to seek the limelight. But after strong performances for Bora-Hansgrohe, Emanuel Buchmann is set to captain the team for the Tour de France – and push for a top-10 finish. (05.07.2019)