US Vice President Mike Pence has witnessed firsthand the conditions that detained migrants face on the US-Mexico border. Donald Trump has announced a nationwide wave of arrests of people facing deportation. 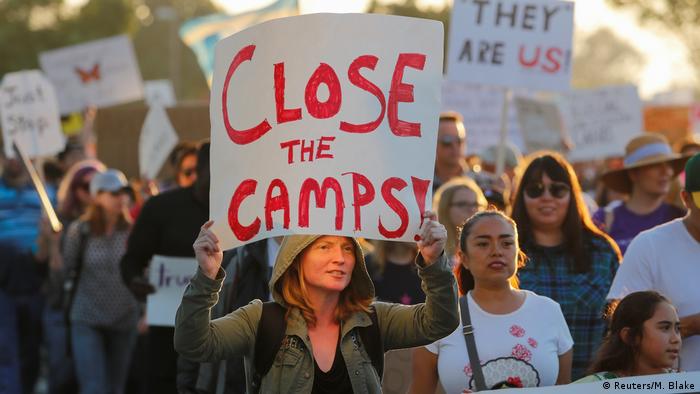 Pence's office called the tour part of an effort to show how his boss, US President Donald Trump, had provided adequate care for people in his custody.

Guarded by agents in masks, prisoners shouted to reporters that authorities had held them for 40 days, underfed them and denied them toothbrushes. Authorities, who have generally denied reporters access at all, removed the press pool covering the vice president's visit within 90 seconds. "Look," Pence said, "this is tough stuff."

The Washington Post reported cages so crowded that prisoners couldn't lie on the concrete to sleep all at once. The scene resembled what an inspector general found in a scathing report delivered last week based on trips to Border Patrol facilities near the Rio Grande — including the station Pence visited.

Families fleeing violence, poverty and drought have come to the US in record numbers this year: In May, the Border Patrol apprehended nearly 133,000 people. Detention facilities for adults — and children — swelled. Authorities left prisoners in facilities for much longer than the 72 hours normally permitted by law.

Trump plans to target thousands more people for deportation over the weekend. The government does not usually announce deportation operations ahead of time. "We are taking them out legally," Trump told reporters on Friday.

Read more: Trump backs down on US Census citizenship question

The president spoke as thousands gathered at the US-Mexico border, across the country and around the world with candles and posters to protest his administration's immigration enforcement and demand that he close detention centers. The centers have been compared to concentration camps.

In 2018, Trump initiated a policy that forcibly separated 2,300 children from their parents — including at least 18 toddlers younger than 2 years old. Five children have died in government detention in less than a year.

Read more: US VP Mike Pence tells Central Americans to 'build your lives in your homeland'

The acting inspector general for the Department of Homeland Security told a congressional hearing Friday that the government has fallen short in terms of "crowding, the prolonged detention, some of the hygiene that the children are supposed to have." Jennifer Costello added: "It's shocking."