Cardinal Angelo Becciu has hit back at Pope Francis, after the Holy See announced his resignation on Thursday. The now-former head of the Vatican's saint-making body says the pontiff pushed him out over fraud claims. 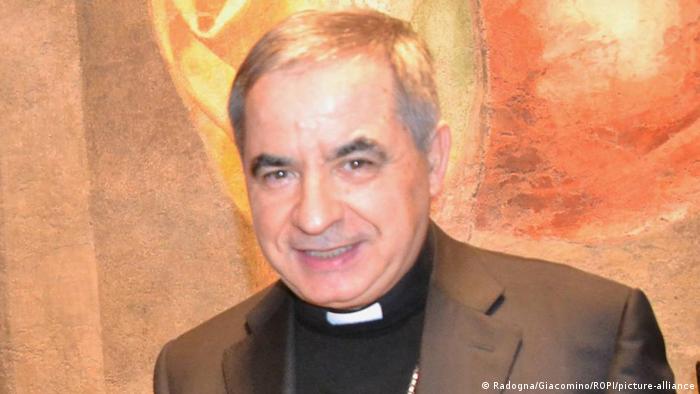 A senior Vatican official, accused of financial fraud, launched an astonishing attack on the Pope on Friday, claiming he had been forced out of his job.

The Holy See released a short statement on Thursday saying Cardinal Angelo Becciu had quit as the head of the Catholic Church's saint-making body and renounced his rights as a cardinal.

The statement said his resignation had been accepted by Pope Francis, without giving further details.

But Becciu, 72, hit back at a press conference in Rome, saying he had been pushed out by Pope Francis. The 72-year-old said the pontiff summoned him for a long-standing meeting, originally set to discuss possible sainthood candidates, before demanding that he quit.

'I don't think I have committed any crime'

According to Becciu, Francis told him that documents from financial police alleging he had embezzled 100,000 euros of Vatican money were behind the decision.

"The pope told me he no longer had confidence in me, because he was told by Vatican prosecutors that supposed committed acts of embezzlement," he said.

Formerly the number two at the Vatican's secretariat of state, Becciu admits sending money from the office's asset fund in 2017 to his home diocese in Ozieri, Sardinia, for its charitable work. He denied any wrongdoing and vowed to clear his name.

"I don't think I have committed any crime," Becciu said during the news conference, sitting in front of a giant silver crucifix in a religious institute just off St. Peter's Square. "If they want me to clarify, I'll clarify."

When his resignation was first announced, initial media reports linked Becciu indirectly to the Vatican's purchase of a luxury residence in London.

Vatican prosecutors are probing that deal, but Becciu said Pope Francis never raised the investigation into the the 2012 agreement that saw the Holy See take a €150 million stake in a property in Chelsea, an upmarket neighborhood in the English capital.

Becciu's renunciation of his cardinal rights means he will no longer be able to vote in the conclave to pick the next pope.

The last cardinal to lose his rights was American Theodore McCarrick in 2018 after a sexual abuse probe was launched. Pope Francis then defrocked him last year, after he was found to have sexually abused adults and minors.

Coronavirus digest: Infections soar in US, Europe 1h ago

US judge delays TikTok ban after influencers sue 4h ago