Britain has appointed former Australian Prime Minister Tony Abbott to a new role, ignoring criticism about his views on equality and the environment. He's been named a senior adviser for the UK's post-Brexit deals. 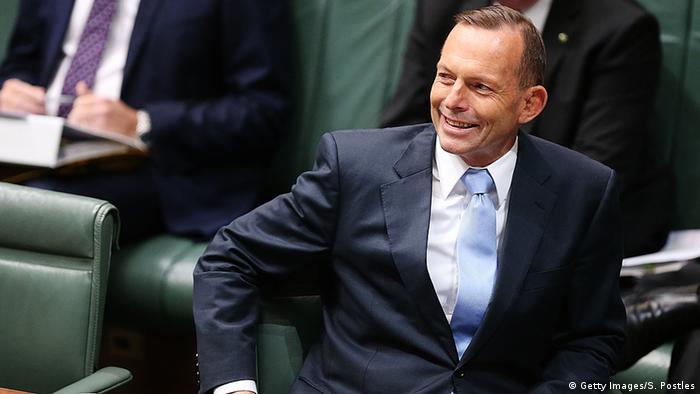 The British government pressed ahead with the appointment of former Australian Prime Minister Tony Abbott to a top trade role, despite critics labeling him "misogynistic."

Abbott arrived in London earlier this week ahead of his selection as a senior adviser for Britain's post-Brexit trade deals.

The decision was met with outrage among opposition lawmakers and activists. They have objected to Abbott's nomination due to previous comments regarding abortion, the environment and equal rights, while others have even cast doubt on his trade expertise.

Labour's Women and Equalities Secretary Marsha de Cordova on Friday tweeted that it is "time for the PM to do the right thing," after sending a joint letter to Boris Johnson's government warning Abbott's views "are both dangerous and divisive."

The letter had several high profile signatories, including actor Sir Ian McKellen and Pride in London, a not-for-profit organization that supports the LGBT+ community in the British capital.

Green Party lawmaker Caroline Lucas said on Twitter that Abbott was "a misogynist bigot, opposed to equal rights, a climate denier, Australia's worst-ever PM and someone who admits himself that his word can't be trusted."

Abbott has previously said that he felt "a bit threatened" by homosexuality, and in 2012 was accused of misogyny by former Australian PM Julia Gillard.

David Henig, UK director of the European Centre For International Political Economy, a trade-focused think tank, said Abbott was also "not an expert in trade."

"And there are many experts in trade who are neither a homophobe, a misogynist, or to add one on, a climate change denier," Henig said.

Trade policy consultant and former Australian trade negotiator Dmitry Grozoubinski also said it was "pushing it" to call Abbott an expert in the field of trade.

"By his own admission, his contribution to Australian free-trade agreements was to tell negotiators not to sweat the technical details and to just get them done," Grozoubinski tweeted.

Read more: 'Eat out to help out' discounts in UK boost coronavirus-hit restaurants

The case for the defense

Australian Prime Minister Scott Morrison came to the defense of Abbott's trade credentials but refused to be drawn over on his compatriot's views on women and homosexuality.

"He knows a lot about trade," Morrison said. "I wish the former prime minister well."

British Health Secretary Matt Hancock was asked on Sky News on Thursday whether he thought Abbott was "the right person to represent us, even if he's a homophobic misogynist?"

Hancock replied that Abbott was "also an expert in trade."

Abbot's sister Christine Forster, who is in a same-sex relationship, said politicians and commentators were labeling Abbott a "'misogynist and homophobe' for the purpose of scoring cheap political points."

"As a woman who has always been part of his life and who came out to him as gay in my early 40s, I know incontrovertibly that Tony is either of those things," Forster said in a statement posted to Twitter.

Finance Minister Mathias Cormann, who served under Abbott, told Australia's Sky News that "not everyone will agree with him, but people are entitled to their views, and that's the way things work in a democracy."

With material from dpa.

Scotland: Boris Johnson seeks to claw back support for UK

British Prime Minister Boris Johnson has headed to Scotland to make the case for the country to remain part of the United Kingdom. Polling has shown that support for independence in on the rise among Scots.