Tokyo's youngest Olympian hopes to inspire others despite exit

Syrian table tennis player Hend Zaza hopes her story can inspire people from war-torn countries despite a first round defeat. At just 12 years old, Zaza is the youngest Olympian to feature at the Tokyo Games. 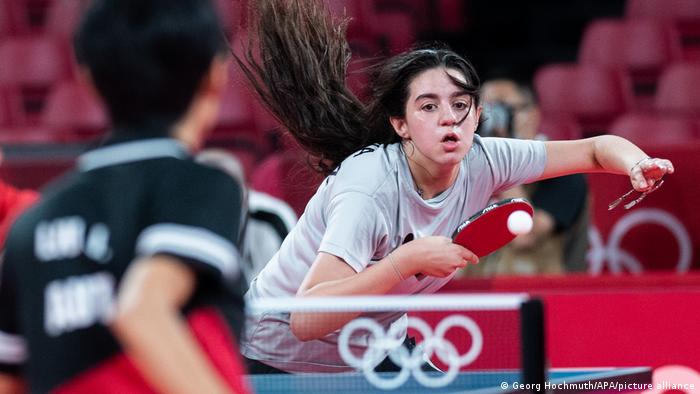 Tokyo 2020's youngest Olympian, 12-year-old Syrian table tennis player Hend Zaza, may have exited in the first round of the women's singles, but she hopes her story can inspire others to overcome adversity around the world.

"My message to anyone who wishes to [reach the Games]: Fight for your dreams," she told reporters after her defeat to experienced Austrian player Liu Jia, now competing in her sixth Olympics.

Zaza grew up in war-torn Syria, and admits overcoming "many different experiences" to reach the competition. She was handed the honor of carrying Syria's flag at the opening ceremony and had hoped to go further in order to inspire as many people as possible.

It wasn't to be, however, and as Zaza lost the final point in her straight-sets exit, she shed a tear before being embraced by an opponent 27 years her senior.

"I had maternal feelings," winner Liu, who has a 10-year-old daughter back home, admitted after the match. "It was less about the sport and more the human side. I had to remind myself not to underestimate her. She's a great talent."

Zaza, who started playing table tennis aged five, explained how finding a place to train with electrcity had been a challenge in the lead up to the Games, and also claimed jet-lag had added to the difficulties coming into this match. It would have been tough to tell, however, as her enthusiasm and the pride of representing her nation shone through.

"I was hoping for a winning match and for better play, but it was a tough opponent so it's a good lesson for me," Zaza said. "I will work hard to get a better result next time."

Liu asked Zaza for a selfie after the match, which isn't something many winners across the Olympics will request over the coming weeks. Then again, not many vanquished opponents are as inspirational as 12-year-old Syrian Hend Zaza.