Middle-distance runner Abraham Guem was stranded in Japan for 21 months with four compatriots. Though his chances at the Tokyo Olympics look slim, he has more at stake than medals.

African runner gets to compete after 21 months in Japan

Abraham Majok Matek Guem has become accustomed to many new things. Heated toilets that drain automatically, tunnels that go through mountains, even the Japanese language is no longer foreign to him.

"There is only one thing I can't get used to: sushi," Guem told DW.

The middle-distance runner from South Sudan has been living in Japan for 21 months. He was only supposed to take part in a long training camp in the buildup to the Tokyo Olympics as part of an initiative by the Japan International Cooperation Agency. Because of the one-year postponement of the Games due to COVID-19, Japan has almost become a second home for him.

"We never felt like foreigners here. People actually often greet us on the street and wish us luck," Guem explains.

"We" refers to him and three other track and field athletes, as well as a coach from South Sudan.

Guem says he has only begun speaking to his relatives back home recently and misses his family very much.

Many locals have opened their hearts to the stranded athletes, especially in Maebashi, an inland town about 100 kilometers (62 miles) north of Tokyo, where the South Sudanese live. They have around €300,000 in donations to pursue their Olympic dreams. 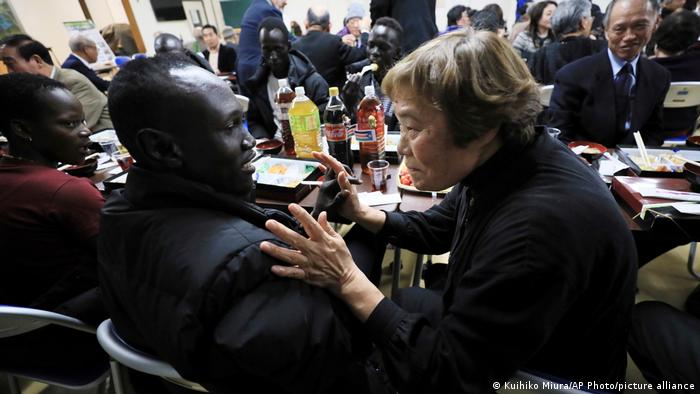 People in Japan, especially in Maebashi, have come to the aid of the South Sudanese athletes

"Our mission is still not accomplished. So far we haven't achieved anything," says Guem. "I'm doing this for my country, not for me. I want to bring peace to my country."

Guem, now 22, grew up in the chaos that was the South Sudanese Civil War, a conflict in which his step brother was killed. Nearly 400,000 people died from violence, hunger and disease.

South Sudan declared its independence in 2011 but is considered one of the poorest countries in the world. There are 3.8 million South Sudanese who have become refugees in- and outside of their country. 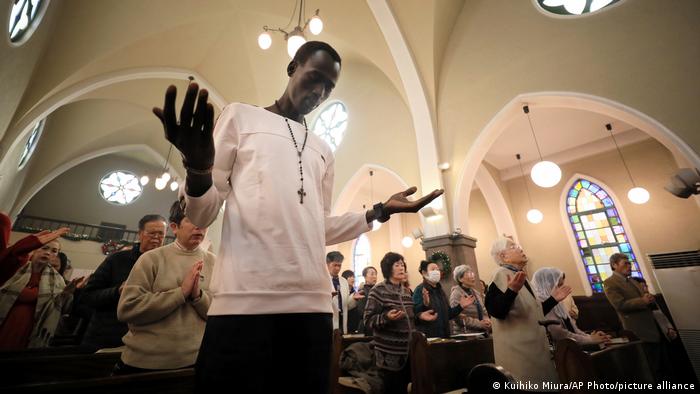 Abraham Guem at a Catholic church in Maebashi, Japan

Guem ran his first race in his black school shoes. He later borrowed new shoes from his school and had to return them when he graduated, so someone else could wear them. For training, Guem ran 17 kilometers through dry and rocky terrain to the capital Juba.

Growing up, he usually only had one small meal per day. But here in Japan, Guem and his team don't have to worry about food. In Maebashi, they have received three meals a day at the city's town hall.

In the morning, they've been going to school to learn Japanese, before training from noon onward.

Message of peace for South Sudan

In April, Guem ran his best time in the 1,500 meters — 3:42.99. The time wasn't good enough to qualify outright for the Olympics, but Guem has been allowed to compete in Tokyo through a new rule that allows each nation to send one male and one female athlete — regardless of ranking — to the Games.

August 3 will be his big day — he is set to run the 1,500 meters at Tokyo's Olympic Stadium. His dream? An Olympic medal, of course, but something else is more important to him.

He wants to make his countrymen proud with his Olympic run, give them hope and return home with a message:

"I come from a poor family. Without support from many people, especially here in Japan, I wouldn't have achieved all this," Guam says. "I learned how important it is to help each other and be there for each other — instead of killing each other."

Mental health is a big topic in Tokyo, in part due to the struggles of prominent female athletes such as Simone Biles. Nikita Ducarroz, an Olympic bronze medalist BMX rider, talks to DW about her own struggles.

African runner gets to compete after 21 months in Japan